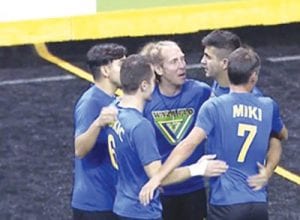 Coming off a loss the night before in Milwaukee Waza Flo jumped out to an early lead in the first quarter off the foot of Ricardo Sobreira. The Flo added goals from Thiago Goncalves and Ivan Campos to end the opening frame leading 3-0.

Waza Flo started the second quarter where it left off by adding a goal from veteran defender Costea Decu. Cedar Rapids responded by getting on the board before the half via Patrick Kelly but went into the break trailing 4-1.

The third quarter belonged to Elmo Neto of the Rampage after he netted a hat trick for the only scoring of the frame to tie things up at 4-4 heading into the fourth. Just 58 seconds into final stanza, Alex Megson gave the Rampage their first lead of the night after converting a power play opportunity. Waza Flo wasn’t done, however, as Goncalves tied things back up at 5-apiece in the final minutes of the game. The Flo put an end to the battle when Leonardo de Oliveira scored the game winner with just 13 seconds remaining.

Last Saturday, the Flo came out firing early but ultimately dropped their first game of the season 10-3 in Milwaukee.

The Flo scored first on a pair of goals by Evan Beutler but the Wave responded with two tallies from Tony Walls to end the first period tied up at two apiece. The Flo seemed to lose some steam in the second frame as Milwaukee scored four goals from Max Ferdinand, Tony Patterson, and a pair from Canadian international Ian Bennett to take a 6-2 lead into the halftime break.

The two teams traded scores in the third period with Leonardo scoring for the Flo and Marcio Leite for the Wave to make it a 7-3 contest after three. The Wave were then able to cruise to a victory with the Flo going to the sixth attacker. Milwaukee’s goals in the final frame were Tenzin Rampa, Bennett, and Leite.