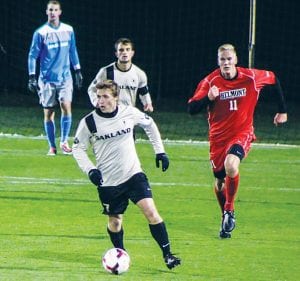 Former Oakland University standout Joey Tinnion is now playing Major Arena Soccer with the Waza Flo in Flint after signing with the team on November 24.

Tinnion, 22, played soccer at the collegiate level for the Oakland University Golden Grizzlies. Tinnion tallied 17 goals during his four years with the OU team, including a team high four in his senior season. The Macomb native was a staple on the Golden Grizzlies team as he started 16 of his team’s 20 games last season. The forward added an assist to his point total last season to bring his career assists to nine and his overall point total to 43.

Waza Flo owner Dominic Scicluna on the signing, “We’re really happy Joey could join our team at this point in our season. He’ll obviously have to get more familiar with the indoor game, but we hope he can make his debut soon, possibly as early as this weekend.”

The Tinnion name is no stranger to soccer in Michigan and that carries some extra significance with Scicluna.

“Joey’s father and my Uncle Paul were business partners owning the Total Soccer complexes in Southeast Michigan. They were also instrumental in growing the sport as they owned the Detroit Rockers.” — L.P.