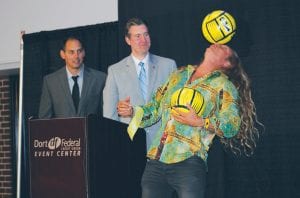 Dominic Scicluna balances soccer balls on his face as he gets set to present them as gifts to Flint Mayor Dayne Walling and Dort Federal Event Center General Manager Jeremy Torrey.

Waza Flo, formerly Detroit Waza Flo, announced at a press conference Tuesday at the Dort Federal Credit Union Event Center that it is moving the franchise to Flint for the upcoming season.

Team co-owner Dominic Scicluna addressed the media and invited guests following brief comments from Dort Federal Event Center General Manager Jeremy Torrey. Flint Mayor Dayne Walling spoke after Scicluna expressing his excitement for another professional sports franchise in Flint. Scicluna then presented yellow soccer balls to Walling and Torrey, speaking with his head tilted all the way back while balancing one ball on his forehead and nose. Walling was all smiles with the unique presentation.

Torrey introduced Scicluna to give specifics on the team’s relocation.

“We have a unique opportunity to bring World Cup soccer to Flint,” Scicluna said. “Soccer…soccer is a tough sport. It’s a unique sport. This is professional arena soccer. It’s more like hockey. Mario (his brother) and I were wrestlers at Detroit Catholic Central. Since the early 80s professional soccer in Michigan has played under a lot of different names, the NASL, the MISL, and now Major Arena Soccer League. Our team, Detroit WAZA is playing in MASL.”

Scicluna spoke about the roots of soccer in Detroit, his time playing for the Detroit Rockers under then-owner Mike Ilitch and then where he is now with Waza.

“We love local businesses and this is one of the best locations in the state, or even in the country, because of how they built the arena. You are right on top of the action. I can’t say enough good things about this arena,” Scicluna said.

“This isn’t like regular soccer,” Scicluna added. “Our pro soccer team is a passion of ours and it’s a business. This is what we do all year long. We go into the schools, Cub Scout meetings, et cetera. We give hope to kids, encouraging youth to come out and try the game and play soccer. The one thing we know is that through soccer they can adapt a healthy lifestyle. We are actually very fortunate that we can reach out to people and work together with the community (through soccer).”

Mayor Walling has been a staunch supporter of not just the Flint Firebirds, but now Waza Flo.

“I want to officially welcome Waza to Flint,” Walling said to raucous applause. “I said this would become an entertainment hub for our community and that’s now becoming more and more of a reality each day. We had a full house here this past weekend to cheer on our new OHL Flint Firebirds in their first win and their first home win and now we’re going to be doing the same thing for Waza Flo in November as we bring another wonderful sports franchise here to the city of Flint.”

“It’s going to send a strong signal across the state and across the country about our community and about this arena for Waza Flo to choose to be here in Flint,” Walling emphasized. “My sons play soccer and we’re going to make sure we are here to support the team and I encourage the community to join us in that support.”

Waza Flo is the only professional soccer team in Michigan. It won the Professional Arena Soccer League (PASL) Eastern Division Championship in 2012 and 2013 and was finalist in the league championship each of those years. Waza Flo is one of 20 teams that plays in the MASL. The season runs November to March. The team’s home opener is Friday, Nov. 6 at 7:30 p.m. Ticket prices are reserved at $15, general admission at $12 and season tickets reserved at $100. Discounts apply for other ticket choices. To learn more about the team, visit www.DetroitWaza.com or via twitter at @DetroitWazaFlo.