We Back the Badge rally draws support for law enforcement 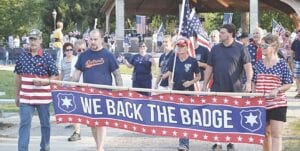 The We Back the Badge march began at Riverview Park and proceeded through downtown Flushing. Photos by Ben Gagnon

FLUSHING — Local law enforcement received a stirring salute from members of the community at the first-ever We Back the Badge event in Flushing.

On Aug. 27, over 100 residents gathered at Flushing’s Riverview Park for a patriotic rally and a brief march through downtown Flushing. Many attendees flew American flags and carried We Back the Badge signs as they marched in solidarity with Flushing police officers.

The rally kicked off with a rendition of the national anthem and was highlighted by speeches from Flushing Mayor Joseph Karlichek, State Sen. Ken Horn (R-Frankenmuth) and police chaplain Dave Coleman from the Williamston Police Department in southeast Michigan.

Roland Szukhent Jr., a Flushing native who organized the rally, said that he wanted to have an event where residents could show off the “red, white and blue” and recognize the service and sacrifices made by police and first responders.

“The police serve our area well and work hard to keep the peace,” he said. “We wanted to honor police officers on the front lines and give them thanks for what they do.” 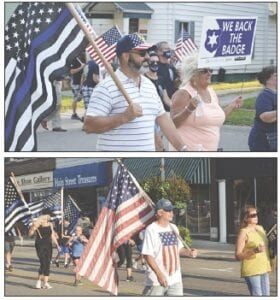 A small gathering of protestors also attended the rally, calling for racial justice and for law enforcement to be held accountable in cases involving excessive force or police brutality. Throughout the summer, police departments have faced nationwide scrutiny, particularly those that have been involved in shootings and deaths of unarmed Black Americans.

In response to criticism against police, speakers at the rally said that abusive or unjust actions displayed by some officers do not reflect the values upheld by most law enforcement members across the country.

Police chaplain Dave Coleman, who is also a reserve officer with his department, urged his fellow cops to exemplify professionalism and to continue serving all members of their communities with respect and integrity.

“Don’t allow the distorted opinions and attacks of others to reach your heart and demean your calling,” he said. “You are a class act.”

Speakers also called for local police to remain fully funded and given the tools and training they need to keep their communities safe.

In Flushing, Mayor Joseph Karlichek said that the city will continue to support its police officers—not just with words but with actions.

In closing, rally organizers presented flag pins and a “Thin Blue Line” painting to Flushing City Police Chief Mark Hoornstra and his officers to honor them for their service to the community.