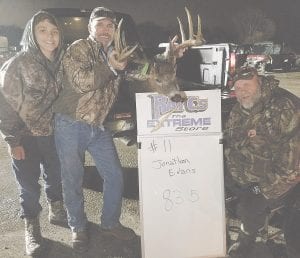 Jonathon Evans took home the first-place prize at Ray C’s in Lapeer with a 17-point buck Wednesday. The VIEW was unable to obtain photos of the Genesee County pole in time for our early holiday deadlines because organizers were still up north hunting.

DAVISON – A cold, brisk morning that featured temperatures around 28 degrees turned into a miserable rainy and wet opening day for area firearm deer hunters last Wednesday. November 15 is the traditional Opening Day of firearm season each year. Despite the conditions, all four area buck poles carried on with their celebrations and welcomed in hunters and their big bucks.

At the Genesee County pole at Madden’s Lounge in Davison, 10 bucks were entered into its contest. Casey West of Ortonville was a repeat winner with the biggest buck, this year a 10-point. West chose a .450 Bushmaster rifle as his prize. He was also the first hunter in with his buck at 11 a.m. Second place went to Mike Rowden of Glennie with an 8-point. He chose a 50 caliber black powder gun. Third place went to Aaron Heath of Flint with an 8-point. He chose a shoulder mount courtesy of Dourlain’s Taxidermy of Clio. Fourth place went to Tim Eickhoff of Davison, who bagged an 8-point. He won a shoulder mount courtesy of Bum’s Taxidermy of Birch Run. Fifth place went to Trevor Bida of Mt. Morris, who tagged an 8-point. His prize was a Parker compound bow.

In neighboring Lapeer County, 17 bucks were entered at Ray C’s and 10 each at the North Branch Area Business Association pole and Campbell’s Local Harvest in Imlay City, a new pole this year on M-53.