Weekend home stand ends in a split for the Firebirds 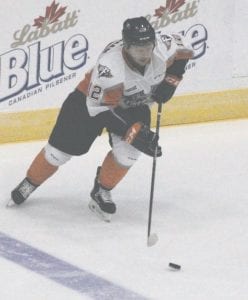 Flint’s Jake Durham looks to move the puck out of the defensive zone.

FLINT – The Flint Firebirds of the Ontario Hockey League split a weekend home stand. Sunday was the most recent game, which ended in a 6-1 loss to the Windsor Spitfires at the Dort Federal Event Center.

Windsor scored on first period goals from Aaron Luchuk and Mathew MacDougall before Fedor Gordeev responded for Flint early in the second period. That would be it for the Firebirds, as the Spitfires had second period tallies from Nathan Staios and Luchuk.

Saturday’s game was much easier in a 7-3 win over the Peterborough Petes. It started on a good note when Nicholas Caamano netted his fourth goal of the season to give Flint an early lead. Zach Gallant tied it for the Petes, but early in the second, Flint jumped out to a two-goal advantage after Ethan Keppen rippled the mesh, followed by Maurizio Colella scoring his seventh of the year.

Logan DeNoble got the Petes back within one early in the third, which Ty Dellandrea answered just 15 seconds later. DeNoble buried another one early not long after that, but a Flint scoring streak buried Peterborough.

Marcus Gretz, Max Kislinger and Ryan Moore also scored throughout the rest of the period, putting the Petes away.

Flint still remains in fourth place in the West Division at 6-4-1 for 13 points. The Firebirds will travel to London on Friday before hosting Sault Ste. Marie on Saturday, then is back