Weekend homestand a split for Firebirds 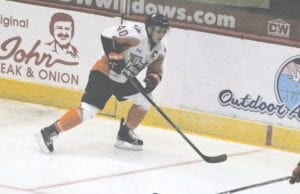 Flint’s Ryan Moore sends the puck past an Ottawa defender during the home opener on Sept. 30.

FLINT — This past weekend’s homestand had its good and bad for the Flint Firebirds of the Ontario Hockey League. The bad was a 5-3 loss to the Kitchener Rangers on Sunday.

No scoring in the first period led to an outburst of offensive output in the final two frames. Adam Mascherin opened the scoring to put the Rangers up early, but Flint would answer with a Maurizio Colella goal at 13:03. Nick McHugh netted another to put Kitchener on top 2-1 prior to a wild third period.

Ryan Moore tied it back up for Flint just 46 seconds into the third, which was answered four minutes later with a Connor Bunnaman goal. Colella would go on to score his second of the game, once again tying it for Flint, but Bunnaman and Greg Meireles’ goals late in the period were too much for Flint to overcome.

Saturday was a different story, as the Firebirds took down the Mississauga Steelheads, 5-3. The momentum started with Ty Dellandrea and Max Kislinger each rippling the mesh in the first period to get the crowd roaring. Colella added one in the second period before Mississauga finally stood up and got on the board.

Trent Fox was the first Steelhead to score and Ryan McLeod added one in the third to bring Mississauga within one. That is, until Ryan Moore found the back of the net at 15:05. The Steelheads cut it back to a one-goal deficit on a Jacob Cascagnette tally, but Hunter Holmes buried the empty-net goal to put it on ice.

Flint, now 5-3-1-0 for 11 points, sits at fourth in the West Division. The Firebirds will now host Peterborough on Saturday and Windsor on Sunday.