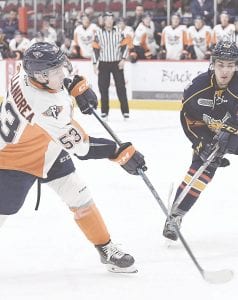 OWEN SOUND, Ont. — A two-game swing in Ontario over the weekend was not pleasant for the Flint Firebirds with the most recent being a 5-2 loss at the Owen Sound Attack on Saturday.

The Attack notched the opening period’s only goal, but Flint’s Riley McCourt answered with the only tally of the middle stanza.

Just 1:27 into the third period, Owen Sound took the lead back, which Flint countered with a Jack Phibbs goal near the seven-minute mark. That, however, would end the Firebirds’ scoring, as Owen Sound netted three unanswered goals after that.

Friday was an even tougher pill to swallow in an 8-2 loss at the Guelph Storm. Flint fell behind quickly and couldn’t seem to recover with Guelph scoring the first five goals of the game, all in the first period. CJ Clarke finally put the Firebirds on the board, but a late first-period goal put the Storm up 6-1 heading into the break.

Guelph added another pair in the second period and McCourt netted a cosmetic goal in the third.

Flint now falls to 2-20-1-0 for five points, keeping it in last place in the West Division.

The Firebirds host Kitchener today, Windsor on Friday and are at Windsor on Saturday.