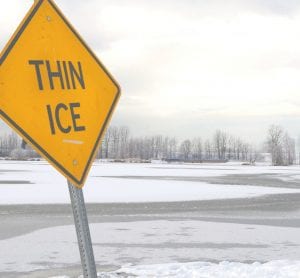 Many areas had little to no ice so anglers are urged to use extreme caution if they’re thinking of heading out. Those visiting spots with open water were targeting and catching steelhead while those on ice (northern part of the state) were seeing success looking for walleye, lake trout and perch.

Lake Erie: Had no ice. There is one dock in at the Metro Park and a few boats were out trolling husky jerks for walleye.

Detroit River: The water was high and fast and in some areas it was muddy. A few boats were out fishing but anglers will need to pay close attention to wind direction and watch for ice floes coming down.

Oakland County: Shoreline ice was thin but should tighten back up. Anglers on Union and Cass Lakes were targeting panfish when using small plastics and wax worms. Those doing the best were hole hopping to stay on the fish. A few nice size pike were caught or speared in four to 10 feet.

Lake St. Clair: Had no ice fishing at all and while colder weather is coming, it will take at least a week of very cold weather before ice fishing returns.

Saginaw Bay: Ice fishing is very limited and is strictly a nearshore activity as there are just a few locations where shore ice was hanging on. Ice quality is BAD, with thickness varying widely within just a few feet. It is NOT advisable to try and take a snowmobile or ATV out on any remaining ice. The ice is not good off the Pine River access site. Some ice was still hanging on at Palmer Road, but perch fishing was slow and the water was murky. A few small perch were caught off White’s Beach and Pinconning. At Linwood, the marina opened their boat channel and a number of small boats were trolling about five miles out. They caught walleye on crank baits however be sure to watch for ice floes. If anyone launches from Linwood Beach, they should be sure to leave their cell-phone number with the marina, as ice floes can move in and block the channel making it impossible to get back in.

The launch at the mouth of the Saginaw River was not useable because of too much ice. Boats were launching from the Hampton Township ramp at the end of Jones Road and fishing about five miles out. The Quanicassee River is wide open, running high and fast. A few crappie and small perch were caught inside Sunset Bay Marina. Any ice from Sebewaing to Sand Point was not safe. The Sebewaing River and the marina are wide open. The water is running high, fast and muddy.

Saginaw River: Most launch sites were useable but take a bag of sand or salt for traction on the ramp. The water is running high, fast and muddy. The Patterson Road ramp at the mouth of the river was not useable because of too much ice.

Tittabawassee River: Shore anglers were taking a few walleyes just upstream of the Gordonville Road launch and down at Mapleton. Catch rates were spotty as the river was high, fast and muddy. Best baits were an orange ¼ ounce jig head with a white twister tail to increase visibility. Anglers could launch at Gordonville Road and fish upstream to the Dow Dam or downstream to Freeland.

Shoreline ice on the inland lakes deteriorated during the rain and warm spell but should tighten up again with the colder temperatures. Extreme caution should always be used on the ice especially in the counties along the Lake Michigan shoreline which are getting significant snowfall this week.

Grand River at Grand Rapids: Anglers are catching steelhead near the 6th Street Dam and near the mouth of the Rogue River. Most are using spawn and wax worms.

Muskegon River: Water levels were still a bit high and fast. A fair number of steelhead were still being caught all the way up to Croton Dam.

Burt Lake: Has ice anglers but use caution until colder temperatures have a chance to shore the ice back up. Some were fishing Maple Bay. With the warm weather this week walking out was the safest bet at this time.

Mullett Lake: Some were out fishing on the south end in Scott Bay but again use caution. Ice thickness was variable and can change quickly from one spot to the next. Walking was the only mode of safe travel at this time.

Higgins Lake: Lake trout fishing has been hot! Fish have been caught in 80 to 110 feet when using greys or jigging Swedish pimples, sand kickers and raps. Perch were caught up by the church camp, B&B Sports, Kelley Beach near Flag Point, and Lincoln Avenue on the south end near the State Park. Anglers may also want to try around the Main Island. Fish were caught in 30 to 60 feet. A few pike are still being caught on tip-ups including one 47 inch fish. No word on whitefish yet.

Houghton Lake: Ice conditions were slick making travel just a little more challenging. Some of the better fishing has been right at first light and last light though walleye were caught along the deeper flats at mid-day. For walleye, anglers were using a slow presentation with a jig and minnow head. Put it right on the bottom and let it sit there then bring it up really slow. Some nice crappies were taken on perch minnows. Bluegills were caught near the Middle Grounds and the south shore weed beds. Perch were caught in the East Bay and the pike were still active.

Lake St. Helen: Was producing some nice pike including one measuring 38 inches. Bluegills and some perch measuring 12 to 13 inches have been caught. Crappie fishing was good in the evening. Walleye catches slowed and many were sub-legal. Ice was in good shape with hard snow cover.

Tawas: There’s still some ice up in the “armpit” of Tawas Bay near Jerry’s Marina and also inside the state harbor…but it’s not good quality ice at all. Anglers near Jerry’s caught a few lake trout and brown trout but very few walleye. Smaller perch were also caught. The water was reported as murky after the recent rains. Just a few small perch were caught inside the state harbor.

Au Gres: Did not have much fishing activity due to poor ice or no ice at all.

Green Lake: Was starting to produce some smelt.

Lake Cadillac: Ice anglers are still targeting pike, walleye and panfish. Anglers are marking fish but getting them to bite has not been easy. Pike numbers were still good for those using tip-ups.

Lake Mitchell: Continues to offer up ice fishing as well. Look for the bite to slow with the onset of much colder temperatures by the weekend.

Manistee River: Has steelhead fishing. With colder temperatures in the forecast, check out the deeper holes.

Lake Gogebic: Had deep slush on the north end in Bergland Bay. Try to stay on the hard pack the snowmobiles made for easier travel but drill your holes away from the hard pack. Travel on the west shore was good however wheeled vehicles should not be on the ice. Walleye fishing slowed and the perch bite has not picked up yet. The walleye bite was sporadic with a few fish taken in 15 to 20 feet. Catch rates for perch were limited. Try wigglers in 20 to 28 feet. The east shore boat launch was slushy. It was not as deep as Bergland Bay but the slush did extend from the boat launch to the south end of the lake.

Keweenaw Bay: Anglers fishing off the pier in L’Anse have picked up a couple of rainbow trout on spinners and Cleo’s. Those fishing off Sand Point reported some good catches of coho and a couple splake when casting Cleo’s or Swedish pimples. A couple rainbow trout were caught on spawn and spinners in the Falls Rivers.

Menominee River: The hot spot continues to be the 6th Street Slip with walleye being the target species. Anglers are jigging minnows and plastics in 30 feet. Electronics have been very helpful. Some trout were caught in open water by the dam above Hattie Street. Small Cleo’s and raps worked well.

Little Bay De Noc: Ice conditions remain good in the northern section from Gladstone Bay to Garth Point. Pressure cracks tightened up over the last week making travel better in several areas. Saunders Point is considered DANGEROUS because of open water. Ice in the southern bay improved as far south as Portage Point. A pressure crack at Aronson Island is running several hundred yards south. Anglers are using extreme caution when navigating this area. The best walleye catches were reported south of Aronson Island in 25 to 45 feet when using jig raps with minnows or tip-ups with sucker minnows. Good numbers of large fish were reported. Whitefish were also caught in this area. Fair to good walleye catches in 15 to 20 feet south of the Escanaba River, 25 to 34 feet in Gladstone Bay, 23 to 30 feet near Kipling, and 14 to 24 feet near the Day’s River. The better perch fishing was in 17 to 35 feet from the Second Reef north to the Center Reef when using mousies, wigglers or minnows. Good numbers of smaller perch were taken in the Escanaba Yacht Harbor. Pike were still active and some large fish were taken in 15 to 20 feet just south of the Escanaba River. Try tip-ups with sucker minnows. Those spearing did well in five to 10 feet near Butler Island but the water was stained.

Munising: Still has ice in the bay however areas to avoid because of poor ice and/or the movement of ice are Powell Point, the City Docks, and Sand Point. Strong winds coupled with strong currents have caused the ice to deteriorate especially at