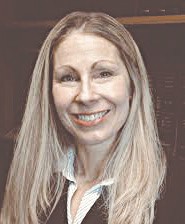 DAVISON — Attorney Dawn Weier’s name will appear on the ballot when Genesee County voters go to the polls Nov. 3, despite a challenge by her opponent for the Burton 67th District Court seat she’s running for.

Weier said she collected and submitted 463 signatures on nominating petitions, collected in six days, on April 21, but approximately 70 of her signatures were challenged by recently appointed 67th District Court Judge Jessica Hammon.

She said she took out petitions from the clerk on April 14-20, and turned them in to the Secretary of State on April 21, the original deadline by law, despite being hampered by the Governor’s Stay at Home Order; while other candidates were suing in Federal Court to get more time.

“I was very grateful for the way everyone came together to help. I had hundreds of friends who signed, and several who also took petitions to their friends,” said Weier in a statement to the media. “Everyone was careful to observe social distancing, asking them to use their own pens, and of course, we traveled with lots of hand sanitizer.”

Hammon filed challenges to approximately 70 of Weier’s signatures, enough to remove her from the ballot.

However, more than half of the signatures Hammon objected to were specifically allowed by the laws and regulations governing petitions, said Weier. A subsequent challenge by Hammon with the Secretary of State’s office was also denied.

On May 29, the Genesee County Board of Canvassers unanimously upheld the ruling.

“I appreciate my opponent’s involvement in the democratic process,” said Hammon. “I look forward to talking with the residents in our community over the course of the next several months and communicating with them my record and the innovative responses our court has implemented to COVID-19.”

Weier, an 18-year Davison attorney who grew up in Burton and spends most of her law practice in the 67th District Court, said she thought it was a good sign for her campaign.

“I kept reading from other candidates how hard it was to get signatures; so, the fact that we qualified for the ballot in less than a week really made me feel like we had great community support,” she said.

Weier’s practice includes, but is not limited to criminal, civil and landlord/tenant matters all of which are litigated in the District Court. She is a member of the 67th District Court Michigan Indigent Defense Commission’s arraignment team where she represents indigent defendants at felony/misdemeanor arraignments and misdemeanor cases through trial.

Prior to the MIDC arraignment team, Weier was on the felony defender list in Genesee County where she has represented hundreds of defendants in felony cases. She lives in Davison with her three daughters. — G.G.