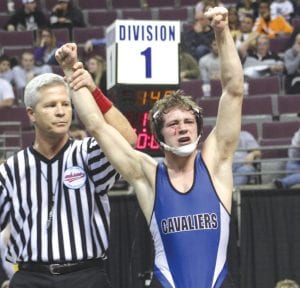 A bloodied but unbeaten Jake Weissend exults in his championship last Saturday at The Palace.

AUBURN HILLS — Jake Weissend scored on an escape with five seconds left to beat Portage Central’s Dominic Latora, 1-0, for the 145-pound state championship last Saturday in the Div. 1 wrestling finals at The Palace of Auburn Hills.

It was the first state title for the Carman-Ainsworth senior, who was knocked out of last year’s finals when Latora’s older brother, Angelo Latora, injured Weissend’s shoulder in the semifinals. Weissend moved on to the final by default, but had to default the championship match when doctors wouldn’t clear him to wrestle.

Weissend didn’t escape this final unscathed either, suffering a cut below his right eye on what he said was a head-butt at the end of the match.

The bout was scoreless until Weissend, starting the third period on the bottom, got to his feet and wriggled free in the final seconds, hopping on one foot several times before yanking his other foot loose for the escape.

“I just wanted to get away more than he wanted to hold on to me,” said an emotional Weissend. “I just kept kicking and fighting.”

Weissend ended the season unde- feated at 58-0 and with a 212-21 career mark that set the school’s win record. He went 4-0 in the state finals, beating Jack Addy of Rochester Adams, 6-3; Ed Nuttall of Ypsilanti Lincoln, 2-1; and Curtiss Brownell of Grand Ledge, 8-4.

“I don’t think I could be any happier right now,” said Tom Weissend, Jake’s father and coach, who got to present the medals on the podium. “I knew that was going to be the match of the century, especially after last year.”