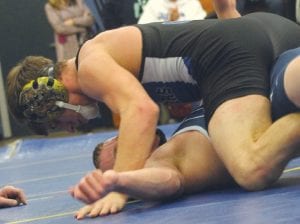 The Carman-Ainsworth senior went right at Robbie Orr of Saginaw Heritage, picking him up, putting him down and pinning him in 1:21 of a 145- pound match in a quadrangular meet Feb. 1 at Birch Run.

The victory lifted Weissend to 46-0 on the season and 200-21 for his four-year career. He had already set the school record for wins earlier this season, breaking the mark of 186 set by Ronnie Latimer from 2004-08.

The milestone victory didn’t go quite the way Weissend expected.

“Picking him up wasn’t really part of the plan,” he said. “But he kind of jumped into it for me, so I said, hey, I’ll take it. Once somebody goes down, I don’t ever plan on letting them up.”

Weissend got a big hug from his coach and father, Tom Weissend, after the match.

“He was definitely focused,” said Tom. “It was one of the career goals he had set for himself right off the bat, so he’s met another goal. About the third week of the season, he got real focused on me, and it was nice to see. I haven’t had to get on him too much.” 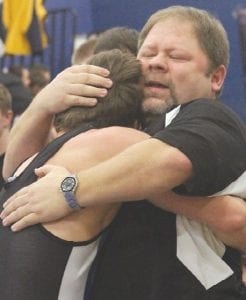 Jake Weissend gets a bear hug from his dad and coach, Tom Weissend.

The Cavs finished second to Davison in the Big Nine Conference meet Friday at Flushing. Weissend won the 145 title and has 202 career wins now. Also taking titles were Shaq Polacek at 135, Jack Baker at 160 and Tae Pendleton at 189.

Weissend is ranked second in the state going into the state tournament, which started with a Div. 1 team district at Carman-Ainsworth last night. The Cavaliers met Heritage in the semifinals, while Flushing wrestled Saginaw. The winner advanced to the regionals at Midland next Wednesday.

Carman-Ainsworth will wrestle in the individual district at Davison on Saturday. No other Cavs are ranked going in, but Dupree and Pendleton were regional qualifiers last year, and Polacek, Cummings and Dawkins are having strong seasons. The top four district placers will advance to the regional Feb. 18, also at Davison.