Weissend to wrestle at Olivet 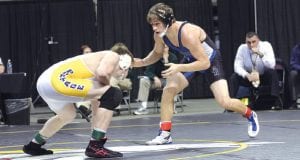 FLINT TWP. — Jake Weissend opened a lot of doors when he went undefeated his senior year. The Carman- Ainsworth wrestler had several mat powers around the Midwest clamoring for his services, and he ultimately chose Olivet College, a Div. 3 school southeast of Lansing.

Weissend, the Div. 1 state champion with a 58-0 record at 145 pounds, also considered Luther College in Iowa and 11-time national champion Augsburg College in Minnesota. He picked Olivet for several reasons.

“The coach really hit a couple points with me, with his philosophy in academics and his philosophy on wrestling,” said Weissend. “The other thing is, their marketing program is just outstanding. It was kind of hard not to go there. I wanted to go far enough away to be on my own, but close enough where, in case I get homesick on weekends I can stop in and say ‘how’s it going?’”

Olivet coach Brandon Brissette is delighted to have him.

“We love him being an undefeated state champion,” Brissette said. “That brings a level of competitiveness to your room that not many guys have. There’s something about those kind of kids. They just have a tenacious streak to them, wanting to do more than the rest and accomplish something that is perfect.

“Also, he comes from a wrestling family and a great background in the sport. And he was looking to go small school early on. Those were really all the things that brought him in to us.”

Jake said he plans to wrestle at either 141 or 149 pounds in college.

Olivet went 18-5 last year and sent five wrestlers to the NCAA Div. 3 championships. The Comets have had just one losing season in the last 43 years.