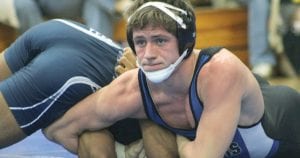 The Carman-Ainsworth senior dominated his first two matches, taking a 16-3 major decision over Marcus Sheperd of Farmington Hills Harrison and pinning Deishawn Stewart of Pontiac in 2:54. He then edged Davison’s Patrick Rooker, 2-1, in the title match.

Weissend, ranked No. 1 in the state by michigangrappler.com, improved his season record to 54-0 and his school-record career mark to 208-21. He advanced to the state finals March 1-3 at The Palace of Auburn Hills. Weissend was second at state last year.

Two other Cavaliers wrestled in the regional, but fell short of qualifying for state. The top four placers in each class moved on.

Tae Pendleton went 1-2 at 171 pounds. The junior lost a 7-3 decision in his opening bout, but stayed alive with a 9-3 win over J.D. Niergarth of Alpena. He was eliminated in an 11-2 loss to eighthranked Knute Hoffman of Midland.

Aaron Dupree dropped his first two matches at 119. The junior lost his opener, 12-5, and was pinned in his next match by Cameron Wilkie of Clarkston.

Three other Carman-Ainsworth wrestlers—district champ Malik Dawkins and runner-up Wesley Cummings at 112, and Darien Vaughn at 125—had qualified for the regional, but did not make weight.