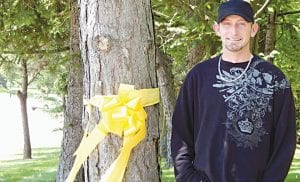 Passersby curious about yellow ribbons tied around three trees in front of a home on Lennon Road between Miller and Linden roads, need wonder no more. They were put up by resident Chad Hardacre in honor of his Army buddy Randy Carr who returned home last Thursday from Afghanistan. Hardacre came home himself in 2010 from Iraq and is a 1996 graduate of Carman-Ainsworth High School. He met Carr while both were stationed in Ft. Hood Texas. Hardacre plans to leave the ribbons up until Carr, who lives in Florida, takes them down himself during a visit scheduled next month. Hardacre said the yellow ribbons also pay homage to all his brothers and sisters serving in the military. Yellow ribbons are a long-standing symbol of support for the troops.