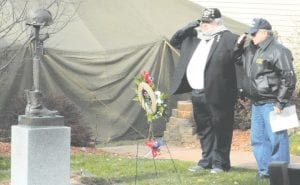 Vietnam War combat veterans Joseph M. Mishler and Don Austin place a wreath at the base of the fallen soldier battle cross at Veterans Memorial Park in Gaines.

Pins also were obtained for another seven veterans who were unable to attend the ceremony, said event organizer and master of ceremonies Dave Aurand.

In the 240-some years since “the shot heard round the world” set off the Revolutionary War, more than 43 million U.S. military men and women have served during wartime. Nearly 1.3 million have died.

“The price of freedom is high,” said Aurand. “We can’t forget those who are willing to pay (that price). This is about a grateful nation (showing appreciation).”

Presenting the pins helped Vietnam veterans “bring closure to their service 50 years ago,” he said.

As part of the ceremony, Vietnam combat veterans Joseph M. Mishler and Don Austin placed a wreath at the foot of the fallen soldier battle cross, and the Gaines Area Rifle Team presented a three-volley salute. The Gaines Community Band provided a selection of patriotic music, with Janice Richardson performing “Taps.”

Additionally, members of a local Vietnam War reenactors group set up a display of Vietnam War memorabilia inside a drab green, canvas tent. Many of the veterans commented on the smell of the canvas and the memories it called forth.

Aurand noted that the Veterans Memorial Committee recently installed more brick pavers, so anyone who wishes to support the park by purchasing a brick may do so.

The event concluded with a luncheon sponsored by the Lions Club.