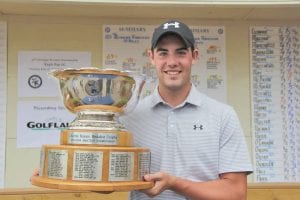 BATH – Jack Weller won medalist honors in stroke play and reached the round of 32 in match play in the 105th Michigan Amateur Championship last week at Eagle Eye Golf Club.

The 2014 Swartz Creek graduate and current Ferris State University student shot 72-67-139 in stroke play Tuesday and Wednesday to finish first in the 163-player field by one stroke over Ken Hudson of Bloomfield Hills and Cleary University golfer Devin Young of Bay City.

Weller was four strokes back after Tuesday’s first round and was still at par when he made the turn in the second round. But he shot 31 on his final nine, closing with four straight birdies for his 5-under-par 67 that gave him the Charles Kocsis Medalist Trophy and the No. 1 seed for match play.

“I played the back nine first and shot even (par) on what in my opinion is the toughest nine, and then I birdied one and got it rolling on six and birdied the last four holes,” Weller told the Golf Association of Michigan. “I was just rolling the ball really good on great greens. The first four birdies were probably on putts of an average of 10 feet, and then at the ninth hole I had a tap-in.”

Weller won his first match Wednesday morning, beating No. 64 seed Michael Cooper of Rockford 1-up. Weller then was eliminated in Wednesday afternoon’s round of 32 by Grand Valley State golfer Domenic Mancinelli of Northville 6-and-4.

Mancinelli went on to reach Saturday’s championship final, where he lost 4-and-2 to Michigan State’s Sam Weatherhead of Grand Rapids.