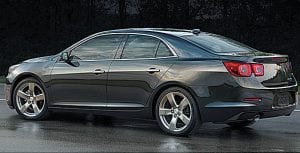 Chevrolet last week unveiled the 2014 Malibu, calling it a roomier, more refined and more efficient execution of its midsize sedan.

The 2014 Malibu has updated styling, a revised interior, a new 2.5L standard engine and suspension enhancements that high- light the changes. It goes on sale this fall.

“The 2014 Chevrolet Malibu builds on the strengths established by the all-new 2013 Malibu to make it a stronger choice for customers,” said Mark Reuss, president, General Motors North America. “The midsize sedan segment is the most contested in the industry and we’re not sitting still with the 2014 Chevrolet Malibu.”

New features for the 2014 Malibu include

“The 2014 Malibu has been engineered to deliver more precise ride and handling that is on par with more expensive sports sedans,” said Ken Kelzer, executive chief engineer, Global Full-Size and Midsize cars.