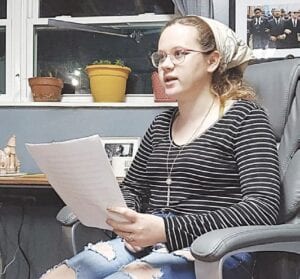 Lo’Ree will read her essay to the Grand Blanc Community Schools Board of Education when they return to face-to-face meetings. A link to her essay is available on the school district website.

Teacher Mary Kennedy-Jacob, who offers extra credit to those students who enter the contest, called the Lo’Ree’s essay “very powerful.”

“She’s a great little writer,” Kennedy-Jacob said. “I’m not shocked that I have really thoughtful writers. I’m also not shocked that kids seem to be better able to move forward on the right side of history.”

For years, instead of just taking the day off, many Grand Blanc students have spent MLK Day in service to their communities. Through Genesee Serves, students and staff have gone to Baker College to make blankets and dog toys and write letters to veterans, Kennedy-Jacob said.

The last two years, they spent the day at Dort Federal Credit Union Event Center, packaging meals. Last year, volunteers from all across Genesee County gathered to package more than 200,000 meals for local families. West Middle School was the largest group there, she said.

“We try to get our students to look outside themselves and be aware of all the diversity that’s available,” Kennedy-Jacob said. “This is one of the ways I do that, offering opportunities and modeling for them.”

Lo’Ree said being able to read her essay for the virtual MLK fundraiser was a milestone.

“It was nerve-wracking at first,” she said. “It was weird, but a nice feeling. I never thought I could do something like that, so knowing I actually could felt nice.”

She said she initially decided to write the essay for the extra credit.

The topic was one about which she feels strongly, Lo’Ree said.

“I think the world needs a change and even people doing the smallest things can help start that,” she said. “Especially lately, I’m seeing things and hearing things in the news, and it makes it seem like it’s a lot bigger issue than it seemed like when I was younger.”

In her essay, Lo’Ree speaks of a divided nation where the march against “institutional racism” has lost precious ground. She references President Abraham Lincoln’s warning that a country divided against itself cannot stand. And, she calls for action to reunite America and let it stand as an example, to the world.

Lo’Ree, who hopes to become a child psychologist one day, says she will continue to promote diversity and acceptance throughout her life.