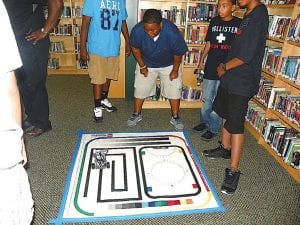 Left, C-A ninthgrader Brandon Hayes cheers as he watches his robot programmed to sense light and dark stay on course. Below, STEM participants work on computers to program robots they built to perform specific tasks.

FLINT TWP. — Brandon Hayes hopes someday to become a cardiologist and his good friend Jordan Nunn wants to be a chemical engineer.

Both will be ninthgraders at Carman- Ainsworth High School in the fall. Last week, encouraged by their middle school algebra teacher, they teamed up to explore the future of technology at a Mobile STEM Workshop conducted by instructors from West Point Military Academy.

“We do several workshops; this one — the mobile robotics workshop — is one of the favorites,’’ said Donald A. Outing, a West Point math professor and director of the academy’s Center for Leadership and Diversity in STEM in which faculty travel all over the country to get middleschool students interested in the fields of science, technology, engineering, mathematics (STEM).

The Center was established to increase the representation of underrepresented minorities. They have been conducting the mobile workshops for about three years, Outing said. 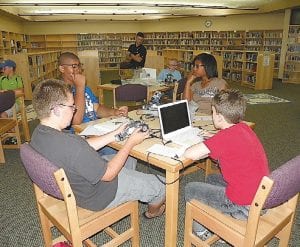 Brandon and Jordan were two of 32 students participating in the workshop at CAMS. The students were from C-A, Grand Blanc, Fenton and Mt. Morris, according to CAMS principal Kevin Summey.

Working in teams of two, the students spent the morning building a robot and in the afternoon were given a series of challenges for which they had to program their robot to perform. The tasks emulate real-world scenarios such as robots working in warehouses that are programmed to locate and retrieve stock parts or to wash and wax floors after being programmed with a floor plan, Outing said.

He called robotics the wave of the future.

“One of the reasons we do this is because we need these kids to be participating in math, science engineering and technology fields down the road,” Outing said, adding that Americans are starting to lose ground to other nations in STEM leadership.

Outing tells students that of the 30 fastest growing fields all require a STEM background.

“They can either be part of it or left behind,” Outing said. “We don’t want them to be left behind.”

He mentioned that President Barack Obama has made a national appeal for more programs to stimulate STEM studies.

“This is an answer to his call to try to develop the next generation of STEM talent,’’ said Outing, who added that he sees it as a matter of national security.

Outing said he was pleased with the level of interest and skill shown by the students at the CAMS workshop.

“We love it when we come and every one of the kids accomplishes the tasks,” Outing said. “That’s not always the case.”

The students engage in a friendly competition to see who does it best but the overall goal is to get them actively engaged in STEM learning.

The STEM crew also take the opportunity to inform students about furthering their knowledge by attending STEM summer camps held on the West Point campus. One camp is for students in the 7th and 8th grade and the second is a Summer Leadership Seminar offered to tenth graders, Outing said. Selected participants get to live on campus, attend labs and interact with West Point cadets and faculty. Application information is sent out to schools earlier in the year.

CAMS was selected as one of two sites in Michigan to host a STEM workshop this year, Outing said. The second workshop was held in Detroit. Both sites were selected by the West Point Society of Michigan.