WFBA acknowledges passing of its founder 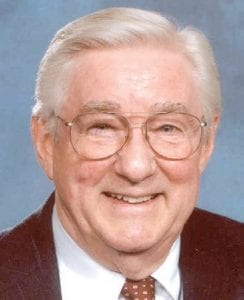 Don Eve, founder of the West Flint Business Association, has passed on.

FLINT TWP. —The West Flint Business Association took a moment last week to sadly acknowledge the passing of one of its founding fathers.

Donald Eve, who helped start the business group 25 years ago and served as its president for more than 20 years, died Jan. 12. Debbe Campbell, current WFBA president, shared Eve’s obituary during the group’s Jan. 21 monthly meeting. A private service has been held.

Eve was remembered for his leadership and tireless service to the WFBA, his family, friends and the west Flint community. He is remembered for originating, organizing and running many charitable events to raise money for the WFBA’s annual scholarship awards.

Born at home in Hartwell, Ohio, on Feb. 17, 1934, Eve moved with his family to Flushing in 1942. After graduating Flushing High School, he attended Central Michigan University. He also proudly served his country as a member of the National Guard, US Army and Air Force.

On May 16, 1959, Eve married Marylu (Lambert) who survives him, as well as his children, Teresa (Teri) Eve of Manhattan Beach, California and Greg Eve (Jennifer Hodgson) of Fenton. He is also mourned by his, sister Linda, several nieces and nephews and his fishing pals, Jimbo, Gene, Steve and Dick. His parents, Rachel and Ernie Eve, preceded him in death.

Eve was also honored with the Flushing High School Alumni Lifetime Achievement Award and also was inducted into its Distinguished Alumni Hall of Fame.

He also served on the Board of Directors of the Genesee County Chamber of Commerce.

The family extended sincere appreciation for the exceptional care Eve received at Hyde Park Memory Care and at Heartland Hospice.

The family asked that any memorials be made in Eve’s name to his parish, St John Vianney, 2415 Bagley Street, Flint, 48504,or to a charity of choice; or simply by “paying it forward” with an act of kindness — as Eve did many times.

Eve’s memory will live on through the annual presentation of the WFBA Don Eve Achievement Award. Established in 2013, the annual award is presented to someone who, following Eve’s example, has volunteered and worked diligently for the best interest, stability and advancement of the WFBA.