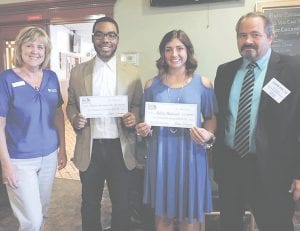 Hailey Baltosser, of Kearsley High School, and Milton Straham III of Oakland University are two of the 2017 WFBA scholarship winners. They are shown here with WFBA scholarship committee members John Foltz and Kim Wilkins. The third award recipient, Noah Burt, could not attend.

FLINT TWP. — The West Flint Business Association presented its annual $2,500 scholarships to three local students, at its May meeting last week. The group is now on summer hiatus until September.

The winners are Hailey Baltosser, Noah Burt and Milton Straham III. Baltosser and Straham were present to receive their awards but Burt had a prior commitment.

Baltosser is the recipient of the High School Community Service Scholarship given in recognition of a high school student demonstrating exceptional achievement and leadership skills through involvement in their respective school and community.

Hailey is a senior at Kearsley High School and has a 3.933 grade point average. She accomplished this while taking every honors and advance placement class available. She is president of her schools National Honor Society and a member of the varsity cheer team.

The WFBA scholarship committee was equally impressed by her dedication to community service in which she has logged more than 300 hours in the past four years. She has worked on projects for the American Red Cross, Feed My Starving Children, Habitat for Humanity, the Food Bank of Eastern Michigan and Hurley Medical Center’s pediatric unknit.

She plans to attend Grand Valley State University and major in nursing or allied health services.

Milton is the recipient of the Adult Learner Scholarship awarded each year to an individual currently in the work force and/or college who is trying to improve by furthering their education while showing evidence of good citizenship, character and ability.

Milton is currently a student in Oakland University’s Master’s of Accounting program. He has 3.5 g.p.a. Milton earned his bachelor of business administration degree in accounting at the University of Michigan-Flint where he earned half of the required credits while dual enrolled in the Genesee Early College Program.

He has been heavily involved in community service, logging more than 550 hours since beginning his undergraduate career. He has worked hard to bring relief to residents that have been affected by the Flint water crisis. He also has been a site leader at the YMCA and a Martin Luther King Service Day volunteers.

Milton ultimately hopes to establish a non-profit organist to aid victims of sex trafficking and to assist minority high school students seeking to earn a college degree. After earning his master’s degree at Oakland, he hopes to seek employment as a college professor, preferably at UM-Flint.

Noah is the winner of the CURBCO/ Swartz Creek Chamber of Commerce Scholarship Award designed to assist a high school student who intends to continue their education in a vocational area at a post-secondary institution.