WFBA gets update on KWA pipeline 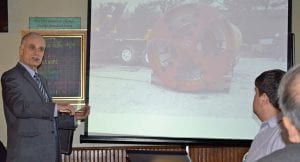 Jeff Wright, Genesee County Drain Commissioner, presented a slide show of the pipe building process that begins at Lake Huron. Below, a hard hat bearing stickers from every company involved with building the pipeline.

FLINT TWP. — Construction of the Karegnondi Water Authority (KWA) pipeline will not only be a game changer for water costs and quality in Genesee County but also a boon for the state’s food processing industry, according to Jeff Wright, Genesee County Drain Commissioner and KWA CEO.

Wright provided an update and longterm vision for the new KWA water pipeline, in a presentation last week to the West Flint Business Association.

Wright said the estimated $233 million project in on schedule and under budget and expected to be ready to deliver raw water to the city of Flint water treatment plant at Dort Highway and Stewart Avenue by June 2016. But it could take another six months or so for Genesee County to build its own Water Treatment Facility to serve the rest of county which will likely continue using water supplied by Detroit until early 2017.

When completed, the pipeline will deliver water pumped from Lake Huron to three counties including Lapeer and Sanilac. 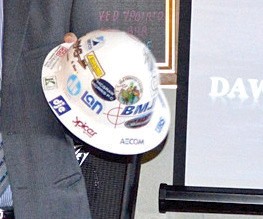 Untreated water is preferred by food processors because they don’t have to remove chlorine and other chemicals from it. The Michigan Agri-Business Association and

Michigan Farm Bureau are among supporters who have endorsed the pipeline, Wright said.

Being able to sell the raw water at an affordable rate makes the pipeline an economic development tool for KWA partners, he said.

Vlasic Pickles in Imlay City is one example of a food processing business that could benefit from KWA-supplied water.

Cranberry growers are another. Michigan ranks number three in the nation in the $900 million a year cranberry industry, Wright said.

The KWA pipeline has potential to triple state cranberry production, bringing jobs and production back to the state. Michigan growers are now shipping cranberries to Texas for processing then shipping them back, Wright said.

One stated goal of the Governor’s office is to keep in Michigan the processing and distribution of products grown here, he said.

Ongoing drought issues in the southwest have caused several larger food-processing companies to now seriously look at the Great Lakes region in Michigan as a base. Many food processors who left Michigan during the past 25 years are now interested in returning, Wright said.

“We (KWA) will be set apart because of the cost we can bring that caters to these companies looking at all Great Lakes states. We do have an edge due to price point,” he said. New industry means more jobs. For example, one of the largest tomato growers in Michigan, a supplier to Meijer stores, employs about 350 people, Wright said.

KWA should be in a position to take advantage of hydroponic growers and other food processors. The pipeline enters Genesee County at Stanley and Washburn roads. About 14 miles of a 17-mile project is currently in the ground, Wright said. The work is being done by Zito Construction of

Grand Blanc. Wright showed slides of the pipe construction in progress including installation of a water intake structure at Lake Huron, pipelines and pumping stations. He explained soil conditions and the depth and diameter of the pipes. Construction did not require exercising eminent domain to obtain land to lay the pipe. KWA officials opted to use existing right-of-ways as much as possible. Only about 27 easements were needed over a course of 80 miles,

Wright said. It cost more but saved time and lengthy legal expenses that might have been incurred from eminent domain acquisition.

Wright said that 80 percent of about 950 people working on the pipeline are local and is expected to peak at about 1,200 workers.

He also discussed water usage issues controlled by the Great Lakes Water Compact made up of states bordering the Great Lakes and Canada. KWA has authority to withdraw up to 85 million gallons a day, about twice the amount used by Flint and Genesee County in August, he said.