WFBA hears about culture in schools during meeting 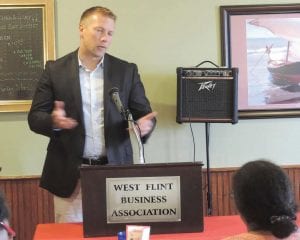 FLINT TWP. — A statewide teacher shortage, a 13-year early college program for high school students, teen suicide and ways to improve school culture were among school improvement topics covered by Swartz Creek School Superintendent Benjamin Mainka, who was guest speaker at the May meeting of the West Flint Business Association.

A teacher shortage is epidemic statewide, getting to a point where standards are compromised and candidates with limited experience might be considered, he said.

Five years ago, a job posting for a high school math teacher would have attracted 65 to 75 applicants he said. Now, a posting might get seven or eight applicants.

Teaching programs have been cut back at Michigan State University and Eastern Michigan University – which traditionally produce the most student teachers.

Many teachers come from a lineage of educators. Now people are advising their children not to enter the teaching field, Mainka said.

The role of teachers has not been supported in recent years, he added, noting that at one time a call home resulted in parents dealing with a problem but now can result in a teacher being blamed and threatened with a lawsuit.

“We have asked teachers for the last 15 years to do more for less,’’ he said.

But school leaders are starting to shift from saying no because something is against policy to saying yes or maybe.

“We are talking with lots of stakeholders about how to invest in the community and have them invest back in us,” he said.

For example, a recent meeting with about 35 pastors and priests was the first time participants had been in the same room to talk about how to support the schools, he said. Educators also are reaching out to government and business leaders, he said.

Mainka also mentioned the formation of a Genesee Middle College that will provide a formal way for disadvantaged students to earn two years of college credits by attending a 13th year of high school.

Asked about bullying, Mainka said it is an issue but solutions in the past five years or so have made the problem worse by creating a victim mentality. Students need to learn how develop coping skills and also how their behavior affects other people, he said. That involves face-to-face discussions, though some students would rather be suspended than face their victims. He also mentioned the influence of a Netflix television series called “!3 Reasons Why” which has generated controversy about glorifying teen suicide.

Mainka said he sent out an email to bring awareness to parents who may not know that their child is watching the show and may be contemplating suicide as a result. In one positive response, Oxford High School students have developed a program called “13 Reasons Why Not,’’ to give students the tools to fight back against the pressures they face, he said.