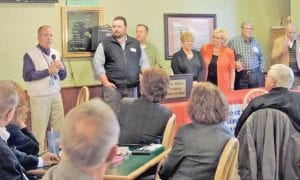 Enosh Fee, a WFBA board member, introduced five of the six candidates for board trustee.

FLINT TWP. — Most candidates for township board offices introduced themselves and answered questions last week during a forum at the West Flint Business Association’s monthly meeting.

Donald Thompson was the only candidate for treasurer in attendance. Incumbent Marsha Binelli and challenger Lisa R. Anderson were unable to attend. Five of six trustee candidates attended including incumbents George Menoutes and Frank Kasle along with challengers Tom Klee, David DuFresne, Carol Pfaff Dahl and Joanne Rhoads. Incumbent Barb Vert did not attend due to a prior engagement.

Each candidate was given time to introduce themselves and state their reason for running.

DuFresne, a firefighter, said he has spent most of his life serving the township and would like to continue doing so as a member of the board of trustees. Dahl said she is a 50-year-resident of the township, graduate of Carman High School and General Motors retiree. She said she is running because she wants Flint Township to continue to be a good place to live.

Rhoads, a married mother of four, described herself as a person who loves people. A township resident for 30 years, she cited honesty and integrity as keys to good government. Menoutes, a retired pharmacist, who has served on many township boards and committees, said his biggest concerns are public safety and roads.

Kasle, a 40-year township resident, said he is running for reelection to continue his focus on good roads and good schools, among other things. Flint Township is a great place to work and raise children and he wants to keep it that way, he said.

Klee, a teacher and well-known sports announcer for Carman- Ainsworth Schools, said he is running to become a voice for the township, including holding evening office hours to talk to residents. He said he would work to ensure follow-through on all concerns.

Thompson, business owner and resident of 35 years, talked about his financial background as a business owner and service on the township Planning Commission. He lost the 2012 election by 24 votes and said he would have won if several absentee ballots did not have to be set aside because they voted both Republican and Democratic.

Enosh Fee, a WFBA board member, read a message from treasurer candidate

Anderson in which she said she was born and raised in the Flint area, worked for Flint Schools for 35 years and has experience working in the public sector and in risk management.

Funk, a candidate for clerk, said her father has owned a township business for 43 years. She currently serves as an administrative assistant to township clerk Kim Courts and has worked for the township for ten years in various departments.

McGillivray-Heston, a former travel agent who lived from coast to coast, after graduating from Carman High School, said her father John served as a township trustee for many years. She has moved back to the Flint area after living on the other side of the state where she has worked in various jobs dealing with detail and precision which are relatable to a clerk’s job, she said.

Fee also read a message from Harris in which she said she is a “people person” and longtime resident with experience in administration.

Candidate for supervisor David Huffman, is a lifelong township resident and also the son of a former township trustee. He has served ten years on the township Road Advisory Committee and is running for office because he is “a strong supporter of small businesses and taxpayers.” He said he believes he and his political team can make the township a better place to live.

Current Supervisor Miller is running for her third term. She said her record reflects her stewardship and ability to manage township business as evidenced by good audits, an improved credit rating and favorable ISO rating for the fire department. She also cited $5 million spent in road millage funds over the past ten years and a federal grant to build the recreational trail.

Miller and Huffman both fielded several questions from the audience including road improvement plans and restoring 24-hour service at Fire Station No. 1.