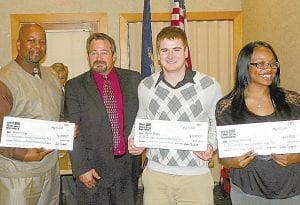 FLINT TWP. — Recipients from Swartz Creek, Davison and Holly were winners of $2,500 college scholarships for 2011, awarded by The West Flint Business Association at its monthly meeting.

From its inception in 1991 to date, the annual WFBA Scholarship program has awarded $91,000 to 45 recipients, said John Folts, chairman of the scholarship committee, who introduced each winner.

Steven Brown, the senior class president at Davison High School, is the High School Scholarship winner. He holds a 4.057 cumulative g.p.a. and is ranked 4th out of 368 students. Also a member of the National Honor Society in his junior and senior year, Steven is an AP scholar, a Boys State alternate for the American Legion, a National Youth Leadership Conference nominee and a student council representative.

He plans to study pre-dentistry at the University of Michigan in Ann Arbor.

A recommendation letter for Steven from a local dentist said: “I believe Steven will be a great asset to the community he will ultimately serve. He possesses a combination of leadership qualities, humanitarianism and a good work ethic rarely seen in someone his age.”

In accepting his check, Steven said it was a tremendous honor he hoped to pay back some day.

Brittany Galloway of Swartz Creek High School is the Genesee Area Skill Center Scholarship Winner. She has a 3.3 cumulative g.p.a. and is an A student in the GASC sports medicine program. Also a member of the Health Occupations Students of America (HOSA), Brittany received a bronze award in clinical specialty at HOSA regional competitions for the past two years.

She belongs to the Key Club Organization, a community service group, and also is a member of Peers Who Care made up of students who work with their fellow peers to overcome hard problems in life.

Brittany plans to study pre-medicine at the University of Michigan-Flint.

Brittany said probably would not have applied for the scholarship if she had not been strongly encouraged by one of her GASC instructors.

James Avery of Holly is the winner of the Adult Leaner Scholarship. He attends Baker College where he has a cumulative 3.80 g.p.a. He previously worked for TRW Automotive. His son Noah has Autism Spectrum Disorder and Pervasive Developmental Delay which inspired Avery to return to school for a degree in elementary education.

In his acceptance remarks, Avery said when he reaches his goals he will be sure to “say that the West Flint Business Association helped me to get there.”

The WFBA meets on the third Wednesday of each month at the Old Country Buffet on Miller Road. Meetings are suspended during summer months and will start up again in September.