What, me panic? YES! 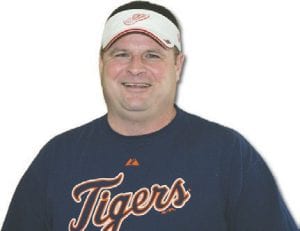 The nervous panic button has been hit by the Fat Guy and I am sure numerous other Tigers baseball fans. I mean just two short weeks ago the Detroit Tigers held a seven-game lead in the division. It looked like the rest of the summer would be a cakewalk and playoff baseball was a given in Motown! Oh, how things can change over a 162 game schedule. The Tigers’ bullpen is still a total and utter mess. I mean, I sound like a broken record every time I bring up the Tigs’ bullpen woes. I get tired of it myself and get super frustrated watching them game in and game out stinking up the joint. Joe Nathan stinks so bad I turn it off when he comes into throw his melon balls up there. This Soria guy is a total waste of money and now he is on the disabled list. He won’t irritate me much now that he is on the DL.

Anibal Sanchez is now on the DL for 15 days. That’s one injury that really hurts this ball club. Detroit needs Anibal in the worst way if it’s going to win the division.

Monday night Justin Verlander surrenders five runs in the first inning to the Pittsburgh Pirates and leaves the game with shoulder stiffness. I realize Verlander is not the Verlander we are used to seeing in Detroit the last few years on the mound. I always feel though, that the Tigers have a chance when he takes the bump every five days.

The Tiger bats remind me of a movie in the early 1900s! Silent, I say! SILENT they are! The song Silent Night wasn’t as silent as the Tigers’ bats have been.

Nick Castellanos has hit the rookie wall is you ask me. J.D. Martinez has also cooled off at the plate. The shortstop position is very weak, too! I said two weeks ago this team had numerous holes and now it’s evident. The boat is taking in water and the Tigers are sinking fast.

All the cheese has slipped off the pizza poor Mr. Ilitch. I wonder what his thoughts are right about now! He is trying to bring a championship to Comerica Park but the square pegs are not going through the round holes!

The Detroit Lions’ game was so boring I fell asleep at halftime. I thought from what I watched they did not play very good. I will say it felt like a regular-season game though when James Jones jumped off sides on a third-andthree and gave the Browns a free first down. Am I right, Lions fans? Heck yes, I am right.

I thought the Cleveland quarterback situation was about a draw. Browns’ quarterbacks Johnny Manziel and Brian Hoyer both did some good things and some bad things. I didn’t feel as though one guy put himself in front of the other for the starting QB position. I think it will be a good watch the rest of the pre-season to see who the Cleveland Browns decide to go with. If you believe what Matt Stafford said after the game that the Lions didn’t even really prepare a game plan for this opener because they didn’t want to reveal too much of the offense, I don’t know if it’s true or not, to be honest.

I will say Dan Orlovsky is still horrible and if Matt Stafford gets injured the entire season will be a waste. Wow, I thought he was just plain brutal under center. Detroit will travel out West to play the Oakland Raiders on Friday night at 10 p.m. I hope the starters play at least more than one series. It’s not like they are that good to be resting. Calvin is the only one who should be sitting in my opinion; he has nothing left to prove to me in the pre-season.

The last golf major of the year, the 96th PGA Championship, went to Rory McIlroy. It was Rory’s third straight golf win in a row. It was his second major in a row also. Rory is now in rare air becoming the third youngest to win four golf majors. The only one missing from the trophy case is the Masters. He will win a Masters before his career is done. Rory no longer needs his last name in my opinion. It’s just Rory! The other two are Tiger and Jack and we all know when those two names are mentioned who you are talking about. Rory has reached that status. He is the new king of the golf course and what a freak of a player he is. He is no fluke! Rory is the real deal and will be for a long time. I have plugged in the crystal cheeseball for football picks! thefatguy@mihomepaper.com