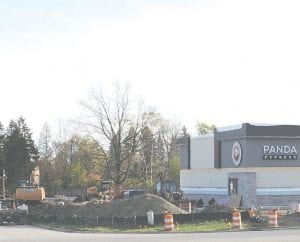 Construction crews are nearing completion on a Panda Express restaurant but just getting started on a Pure Sleep mattress store, both on busy Miller Road.

FLINT TWP. — Construction sites along Miller Road all summer and fall attest to the appeal of the township as a place to do business. Some site plans and special use permits approved by the Planning Commission during the year are beginning to blossom and others are poised to continue the new construction phase into next year.

The most recently approved site plan has passed review but it is still too early for the bulldozers to arrive. It is for a 2,222 square-foot KFC restaurant to be located at 3140 Miller Road, next door to the Sonic drive-through restaurant. There’s no timeline yet on when it will open, according to Tracey Tucker, township director of economic development.

But progress is well underway on the construction of a new Panda Express restaurant, 4409 Miller Road at Swartz Street. Developers received Planning Commission approval fora Special Land Use permit in February for a project that first required completely razing a former bank building on the site.

They are pushing to be open by Thanksgiving, Tucker said.

Construction crews are on site preparing the vacant lot but building has yet to start on a proposed 4,000 square foot Pure Sleep mattress store on Miller Road, next door to Best Buy. It received site plan approval in early March.

The site of the former Fitness USA building, 4580 Miller Road, spent the better part of the summer as a construction zone. Developers have reconfigured the parking lot and dividing the building into four separate units. Tenant for two of them will be a Sleep Number store and Pearl Vision, Tucker said. The other two tenants have not been announced yet.

Construction crews also are busy on Bristol Road building a new Speedway store It is being built next door to an existing Speedway at 2169 Bristol Road and Holiday Drive near the I-75 freeway. Original plans, approved by the Planning Commission in July 2015, called for tearing down the existing building as has been done in remodels of other area Speedways. Instead, the company bought and razed a vacant building on property next door which was the last remaining piece of a Holiday Inn where in 1967 rocker Keith Moon of The Who allegedly drove a car into a swimming pool and did thousands of dollars in damage to his room while celebrating his 21st birthday.

Another pending redevelopment is for a Planet 3 Extreme Air Park slated to open in the former Best Buy/Great Lakes Power Sports building at 3450 Miller Road. It will feature entertainment such as trampolines, a Ninja warrior course, climbing wall and dunk zone, according to information posted on its Facebook page. It is shooting for an early 2018 opening.