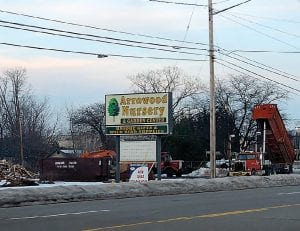 Arrowhead) Nursery on Corunna Road. The 5-plus-acre commercial site is listed for sale and being marketed as vacant land. It was only about three years ago, that the grounds of the longtime nursery were filled with plants and lawn ornaments for sale. A township official says there’s been no official word of a new owner for the site. The building is next door to a vacant gas station and about two doors down from the nowvacant former VGs grocery store.