What’s so hard about wearing a mask? 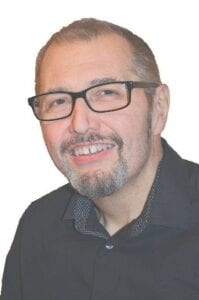 When I came home from the hospital almost three years ago, following my liver transplant, I was told to wear a surgical mask when going to the doctor, visiting the hospital and out in large crowds, especially during cold and flu season.

You see, my anti-rejection medication has left my immune system compromised. My doctors consider the mask a simple form of protection from catching viruses and other potential airborne illnesses.

It was a hard adjustment to make and, at times, I wasn’t always diligent about putting on the paper surgical masks. But over time I got used to it. I put them on for medical appointments, in crowds and sometimes in the office when I knew co-workers were sick.

So, when COVID-19 came I was one of the first people to put on a mask. I was wearing mine before the government had announced the virus was here, even taking ribbing on a plane flight by a military guy who thought it was strange I had a mask on.

“What? I’m not going to get coronavirus sitting next to you, am I?” he asked.

“I’m wearing the mask so I don’t get coronavirus,” I told him.

He smirked and sat down beside me. A month later many people would be wearing such masks, so I wonder what he thinks now?

What I don’t get today is why some people have such a problem wearing a mask out in public? I know, it’s about personal freedom, I’ve heard the argument over and over again. If you wear a mask, you’re a sheep following the flock. You’re bowing down to “Big Brother” who’s trying to control your life.

If my doctors told me to wear a

mask because my immune system is compromised from transplant medications, more than two years before COVID-19 hit, then it sounds to me like there’s a valid reason for that. It helps reduce the risk of spreading or contracting the virus – any virus that’s airborne. Is it going to keep you 100 percent safe? No, nothing will. But it is there to help.

I’ve seen people who refuse to wear masks out and about. They’re the reason I don’t go out as much as I used to. Throughout the pandemic I’ve probably stayed home more than any other time in my life. But seeing how people just throw caution to the wind and go out without masks, stand too close to one another and congregate in large groups just makes it too risky to be out in public as much as I once was.

You may not wear a mask because you don’t care about your own health. I get it, I remember what it felt like to be invincible – until I found out I wasn’t anymore. But think about how it not only is there to protect you, but the people around you.

Now the governor has mandated wearing a mask in public places, though it sounds nearly impossible to enforce. Still, don’t you think it’s a pretty simple request? No different than the seatbelt law if you think about it.

So please, wear a mask. It’s for the public health, safety and welfare. Just think about doing yourself, your family and the rest of the community a favor and wear a mask when you’re out in public. I know, it’s not fun, it’s uncomfortable and it’s not very flattering to wear one – but is it really that hard to do when it’s only in everyone’s best interest?

Gary Gould is the managing editor of the Genesee County View. Contact him at ggould@mihomepaper.com.