Where in the world is Sam? 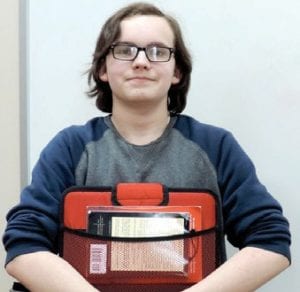 Sam Turner, a Carman- Ainsworth Middle School student, is getting ready to test his knowledge at the Michigan Geography Bee in Kalamazoo.

FLINT TWP. — The Louis and Clark expedition did not explore which state: Iowa, New Mexico, Montana, or Washington?

What is the term for the movement of air from a high pressure area to a low pressure area: wind, erosion, meandering, or flow?

You might not know the answers to those typical Geography Bee questions but Sam Turner does. An eighth grader at Carman-Ainsworth Middle School, Sam, 14, has been notified by the National Geographic Society that he is a semifinalist eligible to compete in the 2015 Michigan National Geographic State Bee, sponsored by Google and Plum Creek. The contest will be held at Fetzer Center in Kalamazoo on Friday, March 27.

This is the second level of the National Geographic Bee competition, which is now in its 27th year. At the first level, students in grades 4-8 competed in a school bee. School champions then took a qualifying test. Results were submitted to the National Geographic Society, which has invited about 100 of the top-scoring students in each of the 50 states and Washington D.C. to compete at the next level.

Sam aced his school level test – a feat he in attributes in part to a love for geography beginning at age 5 when his mom grounded him from watching cartoons. So he switched to the History Channel and got interested in a program about ancient Vikings. From there, his interest in European History blossomed.

“European geography is my strong suit,’’ said Sam, who has been busy studying books and maps to prepare for the state competition, with help from his parents and his history teacher, Nicole Chapman.

“I know what the continent (South America) looks like and where everything is but I don’t know what the countries and cities are,” said Sam, who wants to be an archaeologist, history professor or actor when he grows up.

A self-confessed nerd and owner of five bow ties, Sam also owns about 200 science-fiction books, most of which he has read at least twice. He’s also an original Star Trek fan and enjoys assembling model kids, acting and reading.

“I own more science-fiction books than most kids do books in general,” he said.

He’s involved in school band and theater and also has a role in the upcoming school musical. He’s also speaks several world languages – German, French, Italian, Japanese and some Vietnamese – thanks in part to his father’s military travels and his own personal effort.

He is the only child of his history loving parents Janene Reuss and David Turner of Burton.

Sam has never been to Kalamazoo and is excited about going there to compete.

The national champion will receive a $50,000 college scholarship and lifetime membership to the Society. The national champion will also travel (along with one parent or guardian), all expenses paid, to the Galápagos islands, where he/she will experience geography firsthand through up-close encounters with the islands’ unique wildlife and landscapes. Travel for the trip is provided by Lindblad Expeditions and National Geographic. Visit www.nationalgeographic.com/geobee for more information.

The National Geographic Society is one of the world’s largest nonprofit scientific and educational organizations. The member supported Society, which believes in the power of science, exploration and storytelling to change the world, reaches more than 600 million people each month through its media platforms, products and events. National Geographic has funded more than 11,000 research, conservation and exploration projects, and its education programs promote geographic literacy.