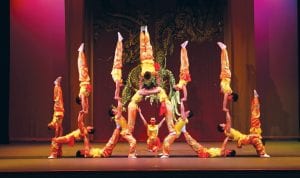 The Peking Acrobats will perform at the Whiting, Feb. 24.

FLINT — The 2015-16 Spring Lineup has been announced by The Whiting. The spring season includes plays, concerts, acrobats, dance, and comedy.

Bram Stoker’s Dracula takes the stage on Feb. 6, at 7 p.m. In Charles Morey’s acclaimed adaptation, Count Dracula slips quietly into Victorian London with a cargo of his native Transylvanian soil, necessary for rest between his victims. The city seems helpless against his frightful power, and only one man, the smart and resourceful Dr. Van Helsing, can stop the carnage. But to do this, he must uncover the vampire’s lair and pierce Dracula’s heart with a wooden stake- setting up an epic confrontation of good vs evil.

On Feb. 21 at 7:30pm, Celtic Nights – Spirit of Freedom tells the story of Irish independence, beginning 100 years ago with the Easter Rising. Through music, song, dance, and storytelling, Celtic Nights honors the struggle of people fighting to gain freedom, independence, and true democracy. Celtic Nights will capture the essence of this journey with beautiful imagery and costumes. The cast includes three male vocalists and three beautiful female singers, six of Ireland›s most talented and coveted international dancers and a band of fine musicians. Enjoy many of the favorite Irish tunes: Danny Boy, Isle of Hope, Whiskey in the Jar and more. 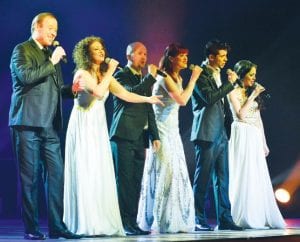 “Celtic Nights – Spirit of Freedom” tells the story of Irish independence, beginning 100 years ago with the Easter Rising.

Peking Acrobats take the stage Feb. 24, at 7 p.m. On their 30th Anniversary tour, The Peking Acrobats continue to entertain audiences of all ages with their daring maneuvers atop a precarious pagoda of chairs, trick-cycling, precision tumbling and gymnastics. This extremely popular show transports timeless tradition into the 21st century through a blending of state-of-the-art technology with ancient artistry that includes live music performed on authentic Chinese instruments.

The Kite Runner performs on March 1, at 7 p.m. Through the eyes of the young protagonist, Amir, the actor takes us on a heartbreaking journey of friendship and betrayal in a society of severe class division. We meet upwards of eight characters, each fully realized by this virtuosic performer. Surrounded by a pre and post show interactive discussion the audience will explore themes including redemption and class systems.

All My Sons is being presented on March 4, at 7:30 p.m. All My Sons, written about post-World War II experiences, continues to resonate with today’s audiences. The play was a Broadway hit revival as news reports were flooded with moving stories of veterans returning from Iraq and Afghanistan. The power of Miller’s story about war’s consequences for both veterans and civilians-of honor and sacrifice, of guilt, honesty, hope, and loveis as relevant today as when the play premiered in 1947.

Hot Sardines are in concert on May 13, at 7:30 p.m. The Hot Sardines have a distinctive recipe for making musical magic: take a blustery brass lineup, layer it over a rhythm section led by a stride-piano virtuoso in the Fats Waller vein, and tie it all together with a oneof the-boys frontwoman who sings in both English and French with a voice from another era. The Sardine sound fuses musical influences from New York, Paris, and New Orleans that were nurtured from the Prohibition era through the Great Depression, WWII and beyond.

Broadway’s Next Hit Musical performs on May 14, at 7 p.m. The hilarious Broadway’s Next Hit Musical is the only unscripted theatrical awards show. Master improvisers gather made up, hit song suggestions from the audience and create a spontaneous evening of music, humor, and laughter. The audience votes for its favorite song and watches as the cast turns it into a full-blown improvised musical – complete with memorable characters, witty dialogue, and plot twists galore.

Single tickets go on sale to the public on Sept. 23. To purchase tickets, visit TheWhiting.com, call 810-237-7333 or visit the Ticket Center located at 1241 E. Kearsley St. just off I-475 between the University of Michigan -Flint and Mott Community College. Tickets are also available for purchase at The Whiting’s Downtown Ticket Center at the Flint Farmers’ Market. Smart phone and tablet users can download The Whiting App to make purchases. — G.G.