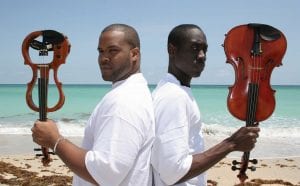 FLINT – The Whiting Auditorium has announced a fresh crop of old favorites and new shows for their 2016- 2017 lineup.

Jarret M. Haynes, executive director at the Whiting, led the presentation in the auditorium by showcasing short previews of the various productions, which include everything from Broadway musicals to dance performances and comedy shows.

“We spend months looking for shows to bring here,” said Haynes. “We exist for and because of you.

Kicking off the season in November is “Black Violin,” featuring Wil Bapitiste and Kev Marcus playing a mixture of world music and hip-hop. In October, two comedies, “Capitol Steps” and “Hal Hoolbrook in Mark Twain Tonight,” are booked on the 2 and 21, respectively.

“Dirty Dancing,” “The Hip Hop Nutcracke” and “Judgement at Nuremburg” will all be coming in the winter months of this year.

As for next year, which stretches until May, the shows include “The Jackie Robinson Story,” “Fahrenheit 451,” “42nd Street” and “Cinderella.” The full brochure is available on the Whiting Auditorium’s website at thewhiting.com.

Haynes said the Whiting is looking to replicate the success for the forthcoming season, and the theater has “hitched its wagon” to the Kearsley Park Players for collaborative efforts. Loe’l Murphy, education and community engagement manager, and Marketing & Communications Manager Kelleigh Tanton had a chance to speak about the positive feedback Whiting has received.

“It was a robust, successful year, artistically,” said Haynes.