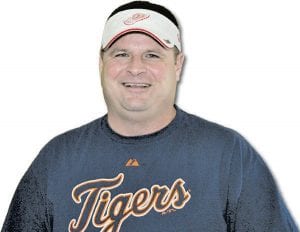 The Fat Guy is back from some fun in the sun, which was a much-needed break from the Michigan winter. It was very hard to keep up on the sporting world while I was gone.

However, we all know what the month of March brings us and that’s the bouncing of the orange pumpkin. Yes, for the next four weeks it’s basketball and more basketball. My wife loves this time of the year! Not really. The Big Ten Conference basketball tournament started a week early so they could play in Madison Square Garden. That’s a huge mistake, according to me. The Big Ten teams who make the tournament will now be sitting around for a good two weeks of no competitive basketball. The players have been playing two games a week for the last three months. I feel as though rustiness could be a factor in game one of the NCAA Tournament. I don’t think the rest is a help at all when it comes to basketball. I guess we will find out in about two weeks.

The Big Ten tournament winner for the second consecutive year was the Michigan Wolverines. The last team to win back to back were the Ohio State Buckeyes in 2010 and 2011. The Wolverines took out Michigan State 75-64 on Saturday. The Michigan win snapped the Spartans’ 13-game winning streak. It also meant Michigan won both games against its arch rival Michigan State this year. I remember the days when Spartan fans said wait until basketball season after the football season. Has that changed some now that Michigan State is winning on the football field? It’s a thought to ponder for sure. Maybe Michigan football fans say just wait until basketball season?

The Wolverines paid back Purdue on Sunday late afternoon with a 75-66 win. The Michigan team had lost two close games to Purdue in the regular season. The win was Michigan’s ninth straight victory to close out the season. I feel as though Coach John Beilein’s team is his best defensive team since his arrival in Ann Arbor in 2007. The play of guard Zavier Simpson, who coach calls his pit bull on the basketball floor, has been tremendous.

The Big Ten season is over and the NCAA tourney is next with selection Sunday coming this Sunday night. The way it looks now, in my eyes anyway, the seeding goes like this. The Michigan Wolverines will go in as three seed. The Purdue Boilermakers as a three seed, also. The Michigan State Spartans a possible two seed, but more than likely a three seed. The Ohio State Buckeyes as a four or five seed. The only other team with a shot to make it is Penn State, and I consider them a long shot. I do personally think they belong in the NCAA Tournament, though. The tournament is as wide open as it’s been in recent years. I really could say you could see all four No. 1 seeds not advance to the Final Four. It’s highly doubtful, yet possible, as college parity has arrived for the 2017-18 season. I will be glued to the show on Sunday and filling brackets out on Monday.

The Detroit Tigers have started spring training down in Lakeland, Florida. The ball club is playing .500 baseball at 6-6. I have not paid much attention to the Tigers yet. I am so not excited about watching them close to 100 games here in 2018. It’s very hard to report on, or even care, what’s going on in spring training. I know that new manager Ron Gardenhire has a huge rebuilding project on his hands and will need a ton on patience. I also realize I need patience, as do you Tiger fans, as this process plays out. There is no Justin Verlander or Ian Kinsler-like star power on this roster. The new signing is a one-year deal of lefty Francisco Liriano for a smooth $4 million.

I like the attitude of Victor Martinez, who is approaching his final year of his monster contract and last year in baseball with a positive attitude. Victor says he wants to be part of the rebuild and just have fun on the baseball field. I say that is all you can ask of a veteran player who knows the Tigers have zero shot at a postseason bid. I see the Detroit Tigers will get to face ex-Tiger pitcher Anibal Sanchez, who recently signed with the Minnesota Twins. I wish Anibal well with his new team.

The Detroit Pistons have fallen out of the Eastern Conference playoff chase. The Pistons currently sit five games out of the eighth and final spot behind the Milwaukee Bucks and Miami Heat. The Blake Griffin trade looks like the worst trade every single day to me now. thefatguy@mihomepaper.com