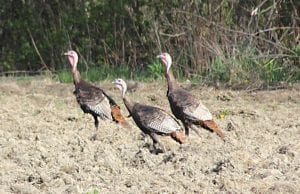 GENESEE COUNTY — Spring wild turkey hunters won’t have to travel far to hunt, and many locals are calling Lapeer and Genesee counties better stomping grounds than what they used to find to the north.

Jim Miller of the Flint River Chapter of the National Wild Turkey Federation is just one of the many hunters switching hunting grounds.

“There are more and more wild turkeys especially in southern Michigan than there ever was,” Miller says. “We used to go to shows and when someone saw our booth they had to come over and tell us that they saw wild turkeys in their yards for the first time. No one does that anymore, because everyone sees them. I started hunting turkeys just north of Davison a few years ago and the hunting is better than my old stomping grounds of Glennie ever was. Last numbers I heard is the wild turkey population is upwards of 250,000, with most of the birds here in southern Michigan.”

The Dept. of Natural Resources (DNR) reports a population of more than 200,000 birds and Al Stewart, Upland Game Bird Specialist says “turkey numbers for the upcoming season are generally good across the state.”

The DNR’s goals for the spring hunting season, says Stewart, is to maximize hunter opportunity while maintaining a satisfactory hunting experience. To that end, the spring hunt is limited to bearded turkeys only. Stewart noted that the conservative harvest approach maintains the continued growth and expansion of the wild turkey numbers across the state.

Michigan offers three main hunts for the spring season; Private-land only hunt #0301 with a season that runs April 22-May 5 with a quota of 65,000; the General License hunt, with quotas varying based on hunt unit and hunt number; and the Guaranteed Hunt #0234 which runs May 6-May 31 statewide except in Unit ZZ, which encompasses the southern Lower Peninsula.

Miller added that the DNR continues to work to make obtaining a permit easier.

“The permit system is getting simpler each year,” he explained. “There is talk of over-the-counter licenses, especially for the fall hunts, starting this fall. The DNR is one, going to protect the wild turkey and two, promote a quality hunt. We can’t ask for much more than that from those in charge.”

“The wild turkey in the north isn’t doing near as well as southern Michigan,” he added. “Those northern birds are a different strain of eastern wild turkeys. Our birds down here are being re-introduced in the northern areas in hopes that they will take off like our southern birds.

“No one has a good answer as to what the problem is with the northern birds. They have a predator problem, but so do we. In fact, it’s getting out of control, but the birds are still increasing. Winter survival is a big problem with the northern birds. Snow makes it hard to find food. There are massive winter survival feedings going on by several groups. The NWTF has furnished and planted hundreds of feed seedlings over the last several years. The northern birds really aren’t in trouble, just not increasing as much as our birds. Probably the biggest problem is early spring freezing rains, because the poults can get pneumonia easily during that time of the year.”

Miller added that he, like many hunters, is pleased with the hunting in Michigan.

“All in all, southern Michigan is becoming one of the premier hunting areas in the Midwest.”

He also noted that education, mentoring and apprentice hunting are key to future success. The NWTF hosts numerous local workshops each spring to do its part in those efforts.

“Our workshop is April 6 from 1-5 p.m. at Williams Gunsight in Davison,” Miller said. “The Camo and Lace ladies will sell coffee and donuts, which to some is the highlight of the show. We also have a new speaker this year. He is Mike Adams, a local pro-staffer that has years of experience behind him. Our workshop is for everyone no matter what the experience level, but since half of those in attendance are first timers, we try and gear the workshop to them. A lot of youngsters have been attending, which is very important to us, the wild turkey and this chapter.”

At the workshop, rules, regulations and safety will be presented by a DNR Conservation Officer, Dourlain Taxidermy will be on site with displays and tips, a master gunsmith will showcase how to customize turkey guns and a drawing will be held for a Remington Model 870 12 gauge turkey shotgun.

Miller also reminds everyone that the local JAKES event returns to Williams Gunsight grounds Aug. 3. That’s a free event for the kids, who get to shoot compound bows, shotguns, BB guns, fish in a trout pond, learn how to tie flies, and more.