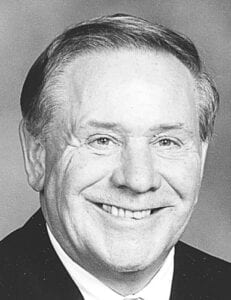 WILLIAM “BILL” FREDERICK DELANEY, 80, of Grand Blanc, went home to be with the Lord August 27th, 2020. Bill grew up in Marshall, MI, graduating from Marshall High School, where he met his future wife and the love of his life Mary. He earned his Bachelor of Science degree from Western Michigan. He married his wife Mary and, if you were to ask her how long she has been married, she always responds, “I don’t know, but not long enough!” Bill and Mary moved to Flint in 1964, where Bill worked at Buick. They moved to Grand Blanc in 1967, where Bill and Mary immediately got involved in their community. Bill successfully ran for Grand Blanc Township Supervisor in 1974, and served until 1984. During this term in office, he was successful in building the current township hall, purchasing and developing Bi-Centennial Park, putting in sewer systems in the township, providing snow removal with no additional taxes, garbage contracts that pick up anything two men can carry, with no deficit spending. In 1980, Bill and Mary founded their private school, Warwick Pointe Academy, where excellence was a tradition, and every one of their students was one of their children. Warwick later became the first charter school in Genesee County in 1996, which was one of the most successful charter schools in the State of Michigan. They expanded into Warwick Pointe Academy East in Holly in 1998, and later sold both schools, which 24 are now Woodland Park Academy in Grand Blanc and Holly Academy in Holly. In 1992, Bill decided to run for Grand Blanc Township Supervisor again and served until 2000. During this time, he was supervisor when Genesys Hospital was built, General Motors Service & Parts Operations was built, instituted the current mapping and accessor online systems, corrected the traffic issues at the railroad crossing at Cook and Holly Rds. successfully working with the railroad, reduced millions in potential lawsuits, and eliminated deficit spending. His last crowning achievement as Supervisor was eliminating the deadly S Curve on Cook Rd., by working closely with the Genesee County Road Commission. Bill’s other accomplishments include past Chairman of the Genesee District Library Board, which he helped set up a special millage to continue the funding and functions of the library system as we know it, Past President of the Genesee County Economic Development Corporation, active member and usher of First Presbyterian Church of Flint, and multiple other service organizations and agencies. Bill’s most significant accomplishment is his marriage with his darling Mary. Their love for each other resonated amongst anyone who knew them. Bill was preceded in death by his parents, two brothers and sister, and is survived by his beloved wife Mary, numerous nieces and nephews, and close friends who were his family. Memorial visitation will be held on Friday, September 4, 2020 from 11:30 a.m.-1:30 p.m. at Hill Funeral Home – 11723 S. Saginaw Street, Grand Blanc. Virtual memorial service will be held on Friday, September 4, 2020 at 2 p.m. on the Hill Funeral Home Facebook page at www.facebook.com/Hill-Funeral-Home-182535468520275/.