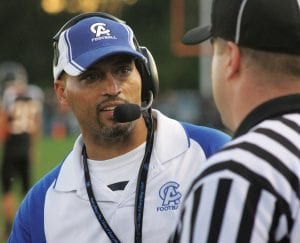 FLINT TWP. – Nate Williams has stepped down as Carman-Ainsworth football coach, and the school has already hired a replacement in former Cavaliers coach Jerry Parker.

Williams resigned to take a teaching job at Richfield Academy in early January and wanted to devote his full attention to his new position as a seventh-grade math teacher. He previously served as a behavior interventionist at Carman-Ainsworth, working with at-risk students.

“I’m getting back in the classroom, and I really wanted to make sure I’m putting proper energy and effort into becoming a good teacher and not spreading myself too thin right now,” Williams said. “I really respect what teachers have to do and the amount of time they put in.”

Williams, 42, just completed his seventh season as Carman-Ainsworth coach and had coached Hamady the previous four years. In all, he has coached the past 14 years, including three years at Whittier Middle School in Flint, but says he isn’t hanging up his whistle for good.

“After losing my dad last year, I just kind of looked at things a little differently,” he said. “I wanted to make sure I wasn’t sacrificing my family to do what I love to do all the time.

“I’m not done coaching. I hope I have another opportunity. It may be only as an assistant coach, but I hope to return. I know I’ll always want to coach.”

Williams built successful teams at both Hamady and Carman-Ainsworth. At Hamady, he took a team that had gone 6-66 the previous eight seasons and got the Hawks into the playoffs in his third year, going 7-3 in 2006 and 8-2 in 2007.

At Carman-Ainsworth he went 43-28, including a 33-11 mark the last four years when the Cavaliers made the playoffs every season. His most successful squad was the 2013 team that went 11-2, setting a school record for wins, and reached the Div. 1 semifinals, the longest playoff run in school history.

“We didn’t accomplish everything I felt we could accomplish, but that’s always part of the process, and chasing it every year is what drives you,” Williams said. “I’m proud of the 54 young men who went on to play in college. I always wanted to prove to the young men who played for me that you can accomplish anything if you put your mind to it.

“He came in at a time when there was a little instability in our program and gave us seven years of stability,” Foltz said. “He had good records and got us into the playoffs year after year.

“He did an excellent job of mentoring a lot of our students, especially those who were struggling. In terms of a guy that was pushing and promoting our kids academically and athletically, he did an outstanding job.”

“He was good when he was here before, and he’s got a long list of accolades,” Foltz said.