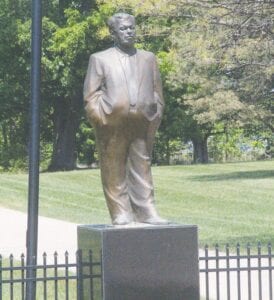 The 8.5-foot bronze statue of former Flint Mayor Don Williamson, who died in 2019, currently sits outside his Davison Township home looking out onto Davison Road. Photo by Gary Gould

DAVISON — A son of the late Don Williamson, businessman turned mayor of Flint, has extended an offer to the city to build a heated pavilion at the Regional Park.

There’s just one catch – the 8.5-foot bronze statue of the former mayor, currently looking out at Davison Road from the front gate of his Potter Lake estate in eastern Davison Township, would have to be moved to the park to be located at the pavilion once built.

Davison City Manager Andrea Schroeder said she recently had a conversation with Scott Williamson, Don Williamson’s son, in which he asked if the city had any “want or dream” for the city’s parks.

She said she told him city officials always wanted to build a heated pavilion with year-round restroom facilities and electrical service at the sledding hill and ice-skating rink, located in the back portion of the Jack Abernathy Regional Park.

“He offered $200,000 to the city to build that pavilion,” Schroeder told the city council at its May 10 meeting. “I didn’t know what to say. I told him I would need to take it to my city council.”

She said the only condition he placed on the offer was the pavilion would be named for his parents – Don and Patsy Lou Williamson – and that the statue would be moved from the Potter’s Lake estate (also the location of Williamson’s Sugarbush Golf Course) to sit near the pavilion.

The city council had little to say when it first heard the report from Schroeder. The matter was placed on the agenda for the council’s May 24 meeting.

At that meeting, the council said it wanted to see the proposal by Scott Williamson in writing before considering further action. Schroeder said she would reach out to Williamson for a written proposal.

Williamson attracted attention with the bronze statue of himself, dressed in a suit and tie, perched atop a 400-pound granite base which sit outside the main gate to his Potter’s Lake estate with bronze statues of lions around it.

An inscription on the granite base reads, “The Colonel’s Inc. Founded by Donald J. Williamson May 10, 1984. His motto ‘Success is the best revenge.’”

Besides serving two terms as Flint mayor, elected in 2003 and re-elected in 2007, Williamson was known for owning several businesses, including the Rugged Bed Line, the Colonel’s International, Brainerd International Raceway and Sugarbush Golf Course.

He also served as a consultant to his wife’s car dealership in Flint Township.

Williamson resigned in 2009 due to his health. While in office he refused to take a salary.

In the early 1960s, Williamson served three years in prison on two felony convictions related to business scams, according to published reports.

It is not known when or if the council will take the matter up again.