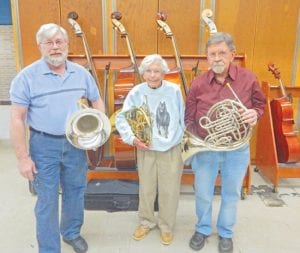 GENESEE COUNTY — The Flint Symphonic Wind Ensemble – formerly known as The Flint Civic Orchestra – will celebrate 50 years by playing an anniversary concert on May 15, 3 p.m., at the Faith Tabernacle on Center Rd.

Four of the charter members – Don Clough, Nancy Wood, Jerry Johnston and Bruce Dunn – have been with the orchestra since its beginning as a more modest 33-person ensemble.

Clough, 80, remembers the orchestra’s first year performing in the season of 1966-67, and trying to begin in a town where the Flint Symphony Orchestra had already been well-established.

“Back then, we played major works,” said Clough, describing the group as predominantly young – many right out of college – and exceptionally talented. “We really had the horses.”

Their first show would be something of a trial run – both to impress the public and get the Flint Community Music Association on board.

“We called it a ‘grand experiment’,” said Clough. “It went very well.”

FCMA approved the Flint Civic Orchestra to be a regular group after a well-received performance at Ainsworth School. Practices were held in the “Carriage Town” behind Dort House.

In that first year, the orchestra played around six shows, including the very first concert open to the public at Whiting Auditorium. Now with 60 members, the Flint Symphonic Wind Ensemble is still going strong as one of the community’s premier music groups.

The show at Faith Tabernacle, according to Clough, was intentionally planned to fall within a week of the group’s original formation. Faith Tabernacle is located at 1225 S. Center Rd.