Wind Symphony to perform at UM-Flint 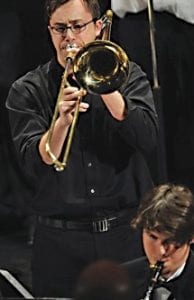 FLINT
— The University of Michigan- Flint Department of Music will be presenting “Airs, Suites and Dances,” featuring the Wind Symphony on Nov. 17, at 7:30 p.m. in the University Theater, 303 East Kearsley St., Flint.

Attendees are asked for a suggested donation of $5. For more information, please contact the Department of Music at 810-762-3377, or visit the department’s website at www.umflint.music.edu.

The program will focus on music inspired and influenced by singing or dancing. Each selection brings a unique perspective to tunes and rhythms used by singers and dances from the Renaissance era to Broadway.

Composer Dana Wilson wrote the opening selection in 2006 with a variety of Big Band style dance rhythms and entitled the music Shortcut Home. His choice of rhythmic motives brings together the music as a repeating figure that he manipulates in various ways throughout the composition. Leonard Bernstein stepped into the spotlight of the musical world as a conductor, but his ability to utilize dance music in a new and exciting combination with Latin music and the orchestra — as found in West Side Story — energized musicals and Broadway in the late 1950s. The Wind Symphony will perform selections from the musical entitled Four Symphonic Dances as a part of the program.

John Barnes Chance became the composer in-residence for a high school in North Carolina as a part of the Ford Foundation’s effort to see the highest-quali- ty music written for young musicians.

Incantation and Dance was written with that goal in mind, a showcase for high school musicians written with the highest intents to provide an education experience for the musicians. Gustav Holst’s Second Military Suite was written in 1911 utilizing folk tunes that were both sung and danced to in England. The work is considered one of the more significant pieces of music written exclusively for the wind band. Composer Ron Nelson created new melodies inspired by Renaissance composers and musicians from various countries with his work entitled Courtly Airs and Dances. Finally, the band will perform a relatively new work composed in 2009 entitled Arabian Dances. Composer Brian Balmages employed genuine Arabian folk tunes used for dancing in this composition for wind band, and allows for the use of authentic hand drums to provide the strong rhythmic backdrop for this work.

Conductor Chris Heidenreich states, “It has been said that all music, regardless of its age, genre, or influence, is one of two things — music for singing, or music for dancing. While not the music that you typically might hear on Dancing with the Stars, our hope is that you enjoy the program of music filled with a variety of rhythmic passages and tuneful melodies.”

Junior Julie Hefner of Ortonville, said the following: I am excited to see the reaction from the audience. But, I also know that we have a lot of work to be done, individually as well as an ensemble, before the concert date arrives. Most of the music is fun but adds a challenge to most, if not every section at some point. Overall, I believe that the audience will enjoy the variety of music. Every piece is unique which will make the concert a very rewarding experience.

Senior Daniel Zimmicky of Grand Blanc said the following: I think that there are great selections this semester. There is a good variety for all. This music is a blast to play; which really makes it an enjoyable concert for performers and audience members. — G.G.