Wine columnist remembered as man of passion, service and family 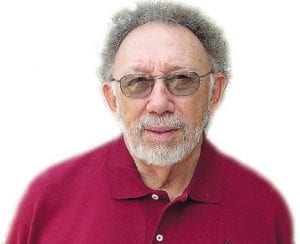 LAPEER — David Ethridge was a man of many passions, and many friends. A longtime member of the community, Ethridge was known for his work as director of Oakdale Regional Center, his volunteerism with local charitable organizations, and his wine column that was published in The Davison Index.

However they knew him, the community will certainly mourn the loss of a good man and good friend this week.

Ethridge, 79, passed away Monday following a prolonged illness. He is survived by his wife, JoAnn, his children, siblings, relatives and loved ones. The family will receive friends at Muir Brothers Funeral Home in Lapeer June 19 from 5- 8 p.m., and a memorial service will take place June 20 at 11 a.m. at the funeral home. His family is asking that contributions be made in his honor to Lapeer Team Work, where he served as chairperson of the board of directors.

“The philosophy that Dr. Ethridge promoted through his work with Lapeer Team Work is that everyone has basic human rights,” said Ann Zettle, executive director of Lapeer Team Work, “and that Team Work will promote the treatment of all persons with dignity and respect.”

Ethridge was born in 1933 in Canton, Ill. to parents Joseph and Frieda Ethridge. As a young man, Ethridge graduated from Western Michigan University with a bachelors degree in occupational therapy.

It was at this time that he met JoAnn Lawhead, the love of his life. The two were married in May of 1956 in Galesburg, Mich. The two have remained married ever since, sharing their lives together for 57 years.

After marrying JoAnn, Ethridge joined the United States Air Force and served as an occupational therapist. He then continued his education and received a masters degree in vocational rehabilitation from Wayne State University and a Ph.D. in guidance and counseling in administration from Michigan State University. His passion for helping others led him to become the director of the Ionia State Hospital, and then director of Oakdale Regional Center in Lapeer.

Ethridge retired in 1992 when the facility closed its doors for the last time.

Ethridge meant anything but slowing down. His passion for the local community and helping others led him to join several service organizations. He is remembered for his dedicated work with the Lapeer Rotary Club, where he had previously served as president.

Ethridge also served on the board of directors for Lapeer Team Work, whose mission is to assess, train and integrate persons with disabilities, enabling them to reach their maximum employment potential in the community.

Ethridge was also a lover of the finer things in life; in particular, he loved wine. It was three decades ago when Ethridge helped start the Lapeer Wine Tasters Guild, one of the largest and most active Tasters Guild chapters in the nation, and served as the director from the start. His love of wine took him all around the world, sampling and judging wines. Locally, he was known for his insightful column, “Wine Scene,” in The Grand Blanc View.

His life was made up of great service to the community and to those in need, with a long list of accomplishments. But greater than that, those who knew Ethridge remember the way he lived every day — with passion and joy and love for the world and all those close to him.