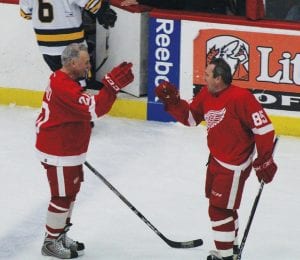 Red Wings’ alumni Mickey Redmond (left) and Petr Klima celebrate after hooking up for a goal in the second period.

FLINT – For the first time since the Flint Generals folded in 2010, a hockey game at Flint’s Perani Arena was played in front of a sold out crowd. The Generals and Detroit Red Wings alumni got together on Friday as the Red Wings came out on top in the end, 7-5.

The massive crowd led to traffic delays on I-69 and around Perani Arena, which delayed the game 15 minutes. The wait, though, didn’t put a damper on the fans’ enthusiasm as they erupted on a regular basis throughout the night.

Once the game got underway, the scoring began early and often. The first tally came from the Red Wings’ Sergei Samsonov, who scooped up the garbage at the front of the net to give Detroit a 1-0 lead.

Less than a minute later, the offensive rush got the Flint goaltender out of position, leaving half of the net wide open for Jimmy Carson to give Detroit a two-goal edge. Later in the period, a rebound landed on the opposite end of the crease and Petr Klima buried it for the final goal of the opening period.

Red Wings legend Darren McCarty suited up, and in the second period, he played 20 minutes in a Generals uniform. McCarty had a brief stint with the Generals in 2007-08 before returning to Detroit to win his fourth Stanley Cup.

Another fan favorite in Detroit, Dino Ciccarelli, got the scoring started in the second stanza, picking up a rebound near the post and backhanding it into the top shelf to give the Wings a commanding 4-0 lead.

Just a few minutes later, though, the Generals finally broke the shutout as Flint fan favorite Jim Duhart rippled the mesh. The goal, however, was quickly responded to in a legendary way. The Red Wings would come down on a two-on-one and Klima fed a centering pass to legend Mickey Redmond, who one-timed the shot into the back of the net.

Flint wouldn’t go away easily, though, as Ross Wilson took a pass in the slot and pulled a beautiful move and scored to cut into the Detroit advantage. It didn’t even take a whole minute before the Wings responded, however, as Bryan Smolinski lit the lamp off of a rebound.

Smolinski would put it across the goal line once more in the third period before Flint ripped off three goals to finish off the contest. Dale Greenwood notched one for the Generals before Keith Whitmore scored twice in the final two minutes, the last of which with just :06 remaining.

During intermissions, several players jerseys, including McCarty, Redmond, Ciccarelli and Joey Kocur, were auctioned off. Redmond’s sold for the highest amount, totalling $1,100. Prior to face off, America The Beautiful was sung by Grand Funk Railroad’s Mark Farner and the Red Wings’ Karen Newman sang the national anthem.