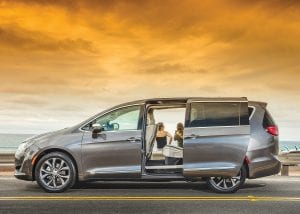 “The Chrysler Pacifica out-styles, out-drives and just plain out-wows the rest of the pack,” said Patrick Olsen, Cars.com editor-in-chief. “It is a true joy to drive; something not often used to describe a minivan. Behind the engine, the van is versatile and packed with impressive family-friendly features.”

The Cars.com minivan challenge included round-robin testing where each expert tested each car on the same course back-to-back and a mileage drive to calculate real-world fuel economy. After extensive testing, the 2017 Chrysler Pacific took the No. 1 spot.

The 2017 Chrysler Pacifica reinvents the minivan segment with an unprecedented level of functionality, versatility, technology and bold styling. Re-engineered from the ground up on an all-new platform, the Pacifica delivers class-leading gasoline and hybrid powertrains to the minivan segment. With more than 100 available safety and security features, the all-new Uconnect Theater rear seat entertainment system, and a full array of comfort and convenience technologies, the Chrysler Pacifica is a no-compromises minivan ideally suited for today’s families and has earned its spot as the most awarded minivan of the year.