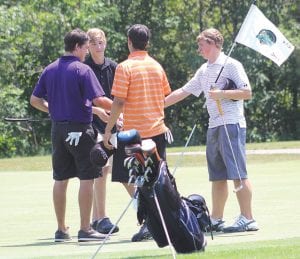 GRAND BLANC — The Flint Junior Golf Association has its own Triple Crown of tournaments this summer, and two of them have been completed in the past two weeks.

Kevin Berry survived a close finish to win the Mancour Cup tournament last Monday and Tuesday at Flint Elks Club. The Fenton native shot 70-76-146 to edge three other players by a stroke.

The inaugural Mallon Cup Challenge will complete the unofficial

Triple Crown next Monday at Warwick Hills Golf and Country Club. All three events are part of the FJGA’s top division, the 18-hole Jack Nicklaus Group. Throw in the season ending tournament July 30-Aug. 1 and the FJGA has itself a grand slam for its showcase division.

The Mancour Cup winner receives an automatic exemption into the Randy Wise Junior Open, an American Junior Golf Association event Aug. 6-9 at Warwick Hills. Berry nabbed that spot despite bogeys on his last two holes Tuesday. He was tied for the lead with Swartz Creek’s Kevin Zyber after a 2-underpar 70 in Monday’s first round.

Chet Ryeson of Lapeer West surged into the lead in the second round, but fell back with a triplebogey on the 15th hole. Dave Thompson of Davison was the fourth player in the final group and had a chance to tie on the 18th hole but left a birdie putt six inches short.