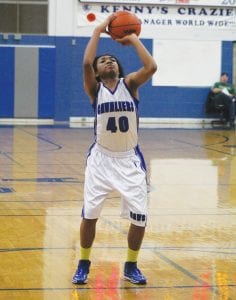 Season overview: One key part of the equation for the Cavs in 2015-16 will be the talent that’s new to the varsity This includes juniors Arron Williams, a guard, and forward Christian Gillarm, sophomore guard Omari Duncan and freshmen Terry Armstrong, a guard, and forward Michael Fletcher.

“With our increase length this year we should defend and rebound the ball better. We need to improve on our on-ball defense, shot selection and overall basketball IQ,” said Witham. “We ended the season last year winning five of our last six. With the addition of the newcomers we are looking to improve on last year’s season. It will take a tougher mindset on the defensive end and out hustling our opponents to improve.” — M.S. 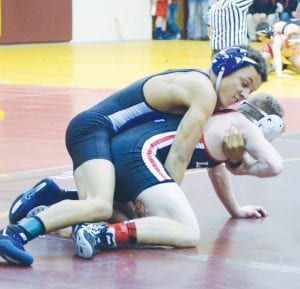 Junior Damien Wilkes is one of several underclassmen back in the Cavaliers’ starting lineup, wrestling at 119 pounds this year. 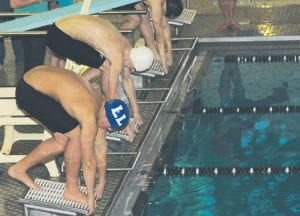 Carman-Ainsworth (white cap) lined up on the blocks against Lapeer last season in a Saginaw Valley League meet at the Lapeer Community Center.

Season overview: The Lady Cavs came on strong in the second half of last season to win a Class A district championship, then graduated a ton of offense when Kincaid and SVL-South MVP McDonald moved on to college ball.

But five other players return, and Richardson is also back after sitting out last year with an ACL injury. She scored 22 points in the season opener last week at Swartz Creek.

“We lost some points last year, but this team is completely different because they play as a team,” said Belill. “Not that we didn’t play as a team before, but the chemistry and the unselfishness is pretty amazing so far. We’re looking forward to the season.” – D.N.

Season overview: Both Nunn and the Cavs were second in the Div. 1 regional last year, and Nunn earned the No. 1 seed for match play at state. All but one bowler from that team are back for another strong run in the SVL and the state tournament.

Season overview: The Lady Cavs have four bowlers back from last year’s regional lineup, led by state qualifier Cox. Most have improved their averages so far this year, with Andrews up by 34 pins to a team-high 172 and Hogan climbing by 20 pins. Watson transfers in from Southwestern with a 167 average, and freshman Doty is off to a 164 start. Cox is at 169.

Season overview: The Cavaliers have two state qualifiers back as the foundation of a very young team. Yost was the team’s Rookie of the Year after going 38-21 at 112 pounds and reaching The Palace as a freshman. Roland was 33-16 at 215 as a sophomore.

There is other returning talent. DeLong had 30 wins as a freshman 130-pounder, and Hamilton was a regional qualifier at heavyweight as a sophomore. Brandon will wrestle at 103 and Wilkes at 119.

“We have one senior in the varsity lineup, maybe two,” said Weissend. “Other than that it’s all sophomores and juniors. We’re looking at having a decent year this year and building into a stronger year next season.” – D.N.

Last year: only won one meet

Season overview: After severing ties with Flushing last year after the Raiders joined the Flint Metro League, Carman- Ainsworth joined forces with the boys’ and girls’ team to make up the losses. This time around, Cowen said the programs will try to go it alone with the girls in the fall and the boys in the winter to grow the programs as standalones.

“This year we decided to split our seasons and try to grow both programs,” said Cowen, who moves up from an assistant to the head coaching position. “We currently have 14 members on the team, a couple being girls that played volleyball during the fall. I look forward to seeing each of our swimmers grow as athletes and become faster and more experienced swimmers.”

Cowen realizes it may take a couple seasons to put the team in contention with its local rivals. For now, her goal is to get the numbers up and the swimmers’ times down.

“We do not have the depth to realistically expect to win many meets, but our focus can be on growing our program and dropping time individually,” Cowen stressed. – L.P.