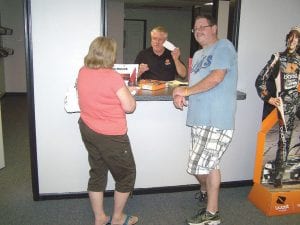 “I like small communities. I like small, hometown environments,” Nelson said. “The community has done well supporting me so far.”

“We always have the newest phones in the area,” Nelson said.

Nelson started the new location with his wife, Jamie Nelson, in early May, and the couple has two other stores in Clio and Owosso. Since they first opened a pager store in Saginaw in 1996, they have always put an emphasis on customer service.

“Customer service is a big deal for us. That’s why we’ve been in business for as long as we have,” Nelson said. “Hopefully word of mouth gets out that I take care of the customers.”

The store features a full line of Android phones ranging from $79.99 to $300, including the new Evo Design 4G that they started carrying on June 7. They also have more basic phones and flips with a Qwerty keypad.

“There’s no contract, no obligation. It’s an awesome deal by all means,” he said.

“We sell a lot of snap-on cases. People like colors on their phone,” Nelson said.

They also act as a payment center for cellular phone accounts. In the competitive wireless market, Nelson believes he will rise above the competition in Swartz Creek.

“This is a tough business to be in. There is one on every corner,” Nelson said. “To survive, you’ve got to take care of the customers.”