Wolverine on display, then moves to permanent home 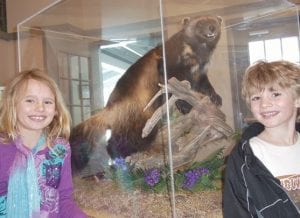 Riley Jo Ford, 8, and Clint Jeffrey Ford, 6, both students at Brown City Schools, posed with the Wolverine at Bay City. Jeff Ford says Riley has done five wolverine presentations to various grades at Brown City Elementary explaining about the life of the wolverine, her death, and many facts and pictures.

The nine-year-old female animal was found dead by hikers Morgan Graham and Todd Rann partly submerged near a beaver dam March 13, 2010 in the Minden City State Game Area, where it had lived for much of the previous six years. She was first discovered by coyote hunters who treed it while running hounds near Bad Axe on Feb. 24, 2004. State wildlife officials say it was the first wolverine ever verified as living in the wild in Michigan.

Deckerville science teacher Jeff Ford was the first to capture photos of the Wolverine using a series of trail cams he set up over a six-year period. He’s presently working with outdoor writer Elizabeth Shaw on a book detailing the Wolverine’s daily life as captured in his color photos. It’s expected in print this spring.

“It’s kind of sad to see her gone,” said Ford of the new permanent display of the Wolverine. “I miss tracking her in her natural environment.”

The Dept. of Natural Resources and Environment announced the autopsy results on April 6, 2010 after the necropsy had been completed at Michigan State University’s Wildlife Diagnostic Laboratory.

The final results showed the nineyear old female wolverine had died of heart degeneration and some liver congestion.

She was last seen alive on Feb. 17, 2010 by Ford, who had previously never been able to touch the animal. Once notified of her death, he was able to hold the 30-lb. lifeless body as he met the state biologists as they were leaving the game area with her body.

She was first thought to be about seven years old after Ford was able to gather hair samples which underwent extensive analysis, placing her origin somewhere in Ontario or Manitoba. Michigan’s first verified wolverine, if they ever were native to the state, say wildlife officials, were extinct more than 200 years ago.

The Wolverines’ necropsy, was used by Ford as a teaching tool for his students, as he was allowed to view and film the entire process. His wildlife cam and videos taken over the past six years have given the state an unprecedented vault of the animals lifestyle, habits and natural state. That she was able to live out her life undisturbed and unharmed was a bonus for Ford and state officials who documented her existence and verified her authenticity taking great pains to not disturb or pressure her out of the area.

“I videotaped the necropsy and the school made copies and we advertised and invited Thumb biology instructors to purchase the copy of the necropsy,” Ford added. “My sciences classes were completely enthralled by it, but I was surprised that only Brown City purchased the necropsy tape to use.”

Ford noted that the school still has about a dozen copies available. He says to simply contact the Deckerville Superintendent’s office to purchase a copy.

The wolverine shared something else with Ford that was discovered in the necropsy: degenerative heart diseas.

“The interesting thing was when they confirmed her heart condition, she died of cardio myeopathy,” Ford noted. “I have the same condition so that was a freaky comparison. I had heart surgery in 2008, and was still trying to research her after that. The coolest thing was putting in the video systems and two years after that I captured her playing with a deer bone in the snow. She was at ease, had it between her claws, and was tossing it around.”

“I purposely put the research area in more than a mile to number one keep her away from humans and to capture her in her comfortable environment.”

The wolverine was mounted by Bay Port taxidermist Sandy Brown, and recently won an award from the state’s taxidermy association.