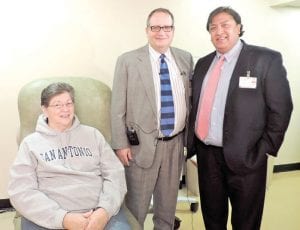 Cynthia Suter of Lapeer with two of her doctors, cardiothoracic surgeons Sanjay Batra and James Martin, talk about her operation and recovery during a press conference at McLaren Flint last week.

FLINT TWP. — “Scared to death” is probably how most people react to the need for open-heart surgery. Cynthia Suter, 60, of Lapeer, was no different.

“I thought my chest was going to be cut open, I was scared to death,’’ said Suter, who has a family history of heart-related deaths.

But her doctors had a different solution for her. One that has greatly exceeded her expectations

On Oct. 20, Suter became the first person at McLaren Flint and probably in mid-Michigan to undergo a Transcatheter Aortic Valve Replacement (TAVR).

Medtronic, a world leader in medical devices based in Minnesota, designated McLaren Flint as a trial site for this new treatment earlier this year because of the medical center’s TAVR experts which include Cardiothoracic Surgeons Sanjay Batra, MD, and James Martin, MD, and Interventional Cardiologist, Thomas Davis, MD. Over the past three years, these physicians have performed over 100 procedures as part of national trials conducted by Medtronic.

The TAVR procedure is performed through a small puncture in the groin or a small incision in the chest. Surgeons insert a tissue valve (Medtronic’s CoreValve®) into the larger artery there and, using X-ray views, ease it up to the heart, then push the damaged valve aside and implant the new one.

The procedure is performed in McLaren Flint’s state-of-the-art hybrid operating room. For patients, the combination of physician expertise and technology means improving the quality and duration of their lives.

“Without TAVR, the average life expectancy for these patients with severe symptomatic aortic stenosis is only one to two years,’’ said Dr. Davis.

In patients with aortic stenosis, a heart valve that normally opens to the size of a silver dollar opens only about the size of a dime, Dr. Batra said. That is critical because the heart has to work harder to pump blood through this small opening back into the body.

The TAVR procedure has been done for many years in Europe but only receive FDA approval for clinical study in the United States in the past few years or so, Martin said.

Hospitals in the Detroit area, Ann Arbor and Grand Rapids are the only others authorized to perform this procedure.

“We are able to offer lifesaving intervention to patients who previously would have died,” Dr. Martin said. He noted that McLaren is a new site with experienced team. It is the first site Medtronic has chosen outside of 50 original research sites, he said.

Though less invasive than open-heart surgery, TAVR still is a major procedure, he said.

“We are taking some very ill patients and doing a pretty major intervention. It is not risk free and not completely safe. We have to be very skilled at what we do.”

Most patients currently undergoing TAVR are in their 80s and 90s, he said. The long-term efficacy of the TAVR procedure still is being studied and tested. Surgically implanted valves can work for ten to 20 years.

What is known is that TAVR patients recover much quicker, Martin said.

Barely three weeks after having the procedure done, Suter is up and about and well on the way to recovery. That is very different from typical openheart surgery patients who spend months convalescing.

She now wears a pacemaker but an unexpected side benefit is that she no longer needs dialysis due to kidney failure. She is thrilled about that.

Suter shared that her father died from a massive coronary, a sister died recently from a stroke, another sister is on fulltime dialysis and a third sister has high blood pressure and diabetes.

“There is a big history in my family. I am lucky, really lucky,’’ said Suter, who turns 61 next month.

“I encourage anybody who qualifies to get it (TAVR) done,’’ she said.