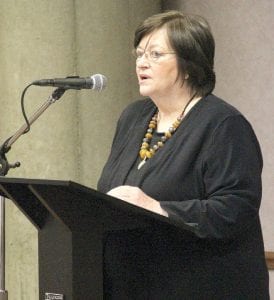 Twenty years after Betty Mahmoody first spoke at the University of Michigan-Flint campus, she returned to detail her escape from Iran with her daughter, Mahtob, after they were held hostage there by Mahmoody’s husband.

FLINT — In honor of the 100th Anniversary of International Women’s Day, Betty Mahmoody, author of Not Without My Daughter, which details her escape from Iran, visited the University of Michigan-Flint 20 years after her first campus visit, but this time she brought her daughter as a special guest.

In 1984, Mahmoody found herself in a difficult situation as her Iranian husband demanded she and their daughter, Mahtob, who was only 4 at the time, take a two-week vacation to Tehran, Iran to visit his family.

Knowing of the harsh conditions of Iran, and given that at the time Iran was involved in a war with Iraq, Mahmoody did not want to go on the vacation, but said she had no choice.

When they arrived in Tehran, Mahmoody said she and her daughter were met with instant culture shock. 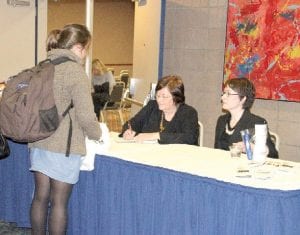 Betty and Mahtob Mahmoody sign autographs for members of those in attendance to hear their story.

“I couldn’t read, write or speak,” Mahmoody said. “I found myself illiterate.”

After two-weeks in Tehran, Mahmoody’s husband told her they were never going back to America.

“I begged. I cried. I screamed. I demanded an audience before the family with an interpreter,” Mahmoody said of her efforts to try and convince her family to let them return to America. “We were told if we ever touched a telephone or walked out the door we would be killed.”

A month into their terrifying ordeal, Mahmoody and Mahtob found their way to the Swiss Embassy which housed the U.S. Intersection. There Mahmoody thought they would find freedom once again, but instead was told they had dual-nationality which stripped them of their rights as Americans and forced them to stay in Iran. 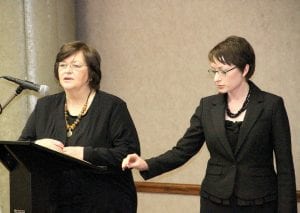 Traveling together to raise awareness for others like themselves, Betty and Mahtob Mahmoody tell audiences their story of escaping Iran is not one of tragedy, but one of triumph.

Mahmoody said. “In their eyes we were only Iranian citizens and there was nothing the U.S. government would or could do to help us get out of Iran.”

For two years, Mahmoody was held hostage in a country hostile toward Americans. She experienced an abusive relationship with her husband, was oppressed and taken away from her daughter for weeks at a time never knowing if they would see each other again.

During those years, all efforts made by Mahmoody to escape with Mahtob had failed until January 1986 when she received the help from local Iranians who knew of their situation and helped get them back to America.

“You can’t label all Iranians as abusers,” Mahmoody said. “If it weren’t for some of them, we would have never escaped.”

Today after years of struggle and even an incident where Mahmoody’s husband found and tried reuniting with Mahtob when she was 21-years-old, the duo travel all over to share what they call a story of triumph, not tragedy, as they raise awareness of the situation they and many other have or are experiencing now.

“We are so incredibly blessed,” said Mahtob, who from her experience has developed lessons in life to live by that include finding the good even in bad situations, “having an attitude for gratitude,” and helping others.

Mahmoody and Mahtob also helped create a law in Michigan that protects families in international divorces and helped create a federal legislation for a parent to kidnap their own children and taken them out of the country.

Mary Jo Sekelsky, vice chancellor for student affairs at U of M-Flint and member of the American Business Women’s Association, said she was present to hear Mahmoody speak 20 years ago and was honor to hear not only her speak again but also hear for the first time from Mahtob.

“One of the things that made this evening special was having Mahtob,” Sekelsky said. “When Betty spoke 20 years ago, Mahtob was still very little and couldn’t express in her own words what this experience was for her. So being here again was wonderful to see them so healthy and still doing the work that obviously they were put on this Earth to do.”

For students and community members in attendance, Sekelsky said she hoped they took away an important lesson from the speech and will work toward bringing peace to the world.

“We know that women continue to face this kind of abuse so we can never forget,” said Sekelsky. “I think we are very fortunate that Betty and Mahtob were here to help remind us this work must continue.”

The event was co-sponsored by the U of M-Flint Women’s Educational Center and the Grand Blanc Crossroad Connection Chapter of the American Business Women’s Association.