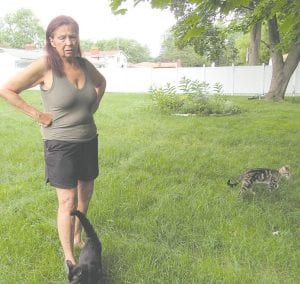 Lisa Olson is visited by a few of the feral cats that live in the woods behind her home. Photo by Jalene Jameson

FLINT TWP. — A Flint Township neighborhood is going to the cats, and frustrated homeowners are asking the Flint Township Board of Trustees to do something about it.

At the board’s July 1 meeting, two residents of Trotwood Lane asked the board to consider changing its ordinance on the number of animals allowed to be kept in a home because one of their neighbors is attracting and feeding a large number of feral cats.

Derrel Fox, 1018 Trotwood Lane, told the board a woman in the neighborhood keeps 12 to 15 cats in her home and feeds a group of 25 to 30 feral cats every day.

“We have a lady in our neighborhood who has probably 12 to 15 cats in her home,” Fox said “There’s 25 to 30 cats that roam around Trotwood. The lady doesn’t mistreat cats. She feeds the feral cats. We have feral cats all over the place. … It’s pretty bad because our back yards face Fenton Road, and there’s woods. When you come in Pickwick Place there’s that woods right there, and there are a lot of feral cats out there, and she feeds them every night and every morning. She calls them in, and it’s not a good situation.” 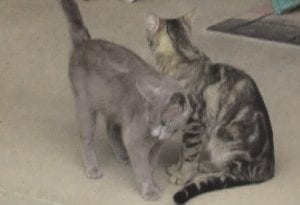 Two feral cats lounge on the front porch of the home of Lisa Olson.

Lisa Olson, 1034 Trotwood Lane, says she has four cats of her own and freely admits she feeds and cares for the feral cats in the neighborhood. She estimates the number of cats living in the woods behind their homes to be closer to 40.

“I’m TNR certified. That means trap, neuter and release,” Olson said. “They don’t understand that I’m actually doing a service, and I’m not the only one. People dump their cats in the woods behind our houses, and they’re usually not fixed. We call these community cats. These are not my cats. The problem doesn’t go away if you just let them starve. They just get replaced by other cats.”

Olson explained that TNR organizations like Hope and All About Animals teach people how to care for feral cats so they don’t spread disease. The groups also spay or neuter cats, then replace them in the same area so there will be fewer cats over time and no new cats will move into the area.

“I feed them. I nurse them back to health,” Olson said. “I’ve paid my own money to have them fixed. I make sure they have temporary housing for the winter. They don’t get in anyone’s garbage. I feed the raccoons and the birds, too.”

Sandra Allen, another Trotwood Lane resident, said at the trustees’ meeting that the current ordinance allows for three dogs and an unlimited number of cats.

Township Supervisor Karyn Miller was working on the issue the morning after the meeting.

“I don’t think the ordinance says an unlimited number of cats,” she said. “I know that in order to have more than three dogs you have to have a kennel license. We had our attorney working on this last year, but we had some changes in staff and didn’t get finished updating this ordinance. Our attorney is looking at it now. Our police chief is sending an officer over to the complainant’s house and building code enforcement is going over to the house with the cats.”

Miller said the township doesn’t have an animal control officer and relies on Genesee County Animal Control for any animal-related issues.

Fox said he and other neighbors have spoken to Olson several times about the cat problems. They’ve also called the Flint Township Police and Genesee County Animal Control.

“An officer came out a couple of weeks ago,” he said. “Our next-door neighbor called around 2 o’clock in the morning because she heard a bunch of racket, and she said she couldn’t take the cats anymore and could they do something. The officer counted 12 cats at that hour.”

Olson said she has been visited by officers and stated the police usually work with TNR groups. She denied that any neighbors had spoken with her about the cats.

Paul Wallace, director of Genesee County Animal Control, says Olson is right, and his hands are tied because there are no laws saying how many cats a person can have and no leashing or licensing laws regarding cats.

“There’s really nothing we can do about that lawfully,” Wallace said. “There’s no leash law, so nobody knows whose cat is whose in any given neighborhood.”

Wallace said as long as the cats are healthy, a person can have as many cats in their home as they want. There also is no law against feeding feral cats.

Wallace said Animal Control can’t remove feral cats from neighborhoods because of the lack of laws that prevent knowing whether a cat is actually owned by someone or is wild.

“If we come out and trap cats, we’re potentially stealing someone’s cat,” he said.

Wallace said they can tell the difference between a domestic cat and a feral cat, but Animal Control can’t accept feral cats.

During a recent visit to Olson’s home, she and Fox were friendly with each other and appeared to be on good terms. They even joked with each other. They just disagree about the cats. Fox said he doesn’t hate cats and would never harm one. He even picked up a gray kitten strolling around Olson’s back yard. But he feels enough is enough.

“We have feces in our yards, We have cat urine in our yards,” he said at the meeting. “If you know anything about cats, it stinks bad. It’s very annoying that every time you go out of the house there’s cats.”

Olson disagreed that there is cat feces and urine in neighbors’ yards. She said cats don’t like grass and prefer a loose dirt or sand that they can dig up. She said her neighbors all have fences to help keep the cats out of their yards. And the back yards face the woods, so she wonders how they know feces, urine and the smell isn’t coming from skunks, raccoons or opossums.

“My yard is the only one open to the woods, so I do have cats sitting in my yard,” she said. “This is a problem all over Genesee County. If someone doesn’t take care of them, disease will spread to tame animals. People like me solve the problem. If you went out and killed all the cats, more would come in and take their place. You get them fixed, and they slowly disappear. You do it over time, and you do it by getting them fixed.”